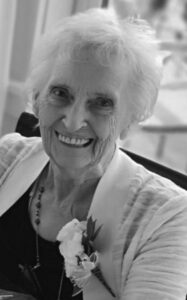 It is with heavy hearts that we announce the passing of DOROTHY SHIRLEY ANDERSEN of Kelowna, British Columbia on December 9, 2020, at the age of 91, beloved wife of the late John Max Andersen. She passed peacefully at Lake Country Lodge with her family by her side.

Cherished mother of two daughters: Debra (Peter) and Shelley (Neil). She was deeply loved by her five grandchildren Court (Sara), Whitney (Collin), Rebecca, Jared, and Kylie; great-granddaughter Charlie; and her two step-grandchildren, Liam (Sammy) and Alec (Kristyn). She is survived by brothers Ron, Ken (Ces), and Keith; sister, Barbara; sister-in-law, Eileen; brother-in-law, Jim (Barbara), as well as many cousins, nieces/nephews and their families.

Dorothy Shirley Metcalfe was born on January 21, 1929 in Coronation, Alberta. She was the second oldest child (oldest daughter) of Bill and Dorothy’s seven children. Most of Shirley’s early years were spent in and around southern Alberta.

Shirley and Max met at the Ice Capades in Lethbridge and were married in Claresholm on June 25, 1948. Max worked for Calgary Power and as a result they moved numerous times throughout Alberta during their working life. Each location added many good friends that they stayed in touch with wherever they were. Retirement took them to Salt Spring Island for a number of years before relocating back to Magrath in southern Alberta. A few years after Max passed away in 1997, Shirley relocated to the Okanagan and lived there until her recent passing.

Shirley and Max were lifetime golfers and to ensure they were able to enjoy the game year-round, they became snowbirds for many of their retirement years.

Shirley will always be remembered as a kind and loving woman with a beautiful and gentle spirit. Her family, both close and extended, were very important to her and she cared deeply for all.

Flowers are gratefully declined. Memorial Donations can be made in Shirley’s name to the Alzheimer’s Foundation of Alberta and the NWT, 10430 61 Ave NW #306, Edmonton, AB T6H 2J3 or to another charity of one’s choice.