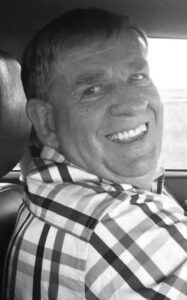 William Keith Fyfe, beloved husband and eternal partner of Trudie Fyfe, of Lethbridge, passed away peacefully at home on December 14, 2020 at the age of 69 years.

Bill was born on October 28, 1951, in Lethbridge, Alberta. He was the youngest of five children born to Art and Mary Fyfe. Bill grew up in Stirling and moved to Lethbridge as a teenager. As a child, Bill spent a great deal of time outdoors riding around on his bike and doing activities with his extended family.

Once he moved to Lethbridge, Bill was a proud “Northsider” and made his lifelong friendships with Gord Tanaka, Gary Knox, Larry Nakahama and Alex Napadajlo. He played football in high school, proudly wearing purple and gold for the Winston Churchill Bulldogs. In his younger years, Bill worked various jobs, before finally settling on becoming a journeyman electrician. Once he completed his apprenticeship, Bill owned and operated Fyfe’s Electric for over 35 years and later received his master electrician certification.

In 1974, Bill began courting his future wife and eternal sweetheart, Trudie. After a short engagement, they were married in the temple on June 22, 1974. They enjoyed a marriage of over 46 years and enjoyed spending time with their family. The Fyfe family enjoyed camping regularly. He always looked forward to the family’s annual camping trip at the Apgar Campground in Montana. He was grateful for all the various visitors who spent time with The Fyfe Family on their annual camping trip.

Bill also enjoyed playing cards, board games, Sudoko and doing puzzles with family and friends. Bill was known for his genuine kindness and gentle nature. Bill was often teased as being the “dog whisperer” as all pets took an immediate liking to Bill and loved him without hesitation. Bill was an active member in the community, volunteering his time for The Boy Scouts of Canada for over 25 years.

Bill was an active and faithful member of The Church of Jesus Christ of Latter-day Saints. He had a strong testimony of the gospel, was dedicated to The Book of Mormon and was grateful to hold the Priesthood during these times to allow him to administer the sacrament at home as in person worship was not possible. He served in many leadership capacities including bishop for over 6 years, and along with his wife, Trudie, served as missionaries in the Addiction Recovery Program for over 7 years. The Church provided Bill with many opportunities to provide service and ministering to others. His faith was a huge part of his life and he was valued in the LDS community.

A Celebration of Bill’s life will be held at later date when restrictions are eased and we can honour his journey on Earth together.

Due to Covid, we ask those wishing to attend to please call

ahead and book a time to visit. Masks are mandatory.