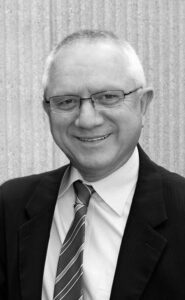 AURELIO “REL” DELBELLO, husband, father, teacher, coach, and author, passed away after a lengthy battle with Alzheimer’s disease on December 23, 2020 at the age of 71 years.

Rel was born on July 9, 1949 in Trieste, Italy to Gioacchino and Maria Delbello. In 1957, he and his parents immigrated to Canada, settling in Coaldale. He grew up in Lethbridge and graduated from Catholic Central High School in 1968. Rel was a CCH Cougar athlete throughout his high school years, playing on both the basketball and football teams. From 1969-1973, he attended Minot State University in North Dakota, where he played football and obtained a Bachelor of Science in Physical Education.

Rel enjoyed a 35-year-long career in the Holy Spirit Catholic School Division, primarily teaching at his alma mater, Catholic Central High School. Rel also rejoined the CCH Cougars football team from 1975-1983 as their Head Coach. During his tenure, Rel and his long-time friend and colleague, Rick Credico, led the team to several championships. After retiring from teaching in 2009, Rel spent the following three years working with students in the Registered Apprenticeship Program through CAREERS: The Next Generation.

Between 1990 and 1992, Rel co-authored the “Century 21 Accounting: Third Canadian Edition” textbook, along with related workbooks and guides. Today, his textbook is still used in classrooms to prepare students for a career in accounting and to educate businesses in basic accounting practices.

Rel’s hobbies and interests reflected his deep love for his children. He loved sharing his passion for sports with them and could be found behind the bench as their coach or in the stands as their biggest cheerleader. Rel took a keen interest in videography, mainly in order to capture every moment with his family. On vacation, he would be reliably recording with the latest video camera in hand. Finally, Rel had a love of sweets (and ice cream in particular), sharing his secret stashes with his children.

Rel is predeceased by his parents, Gioacchino and Maria, and brother, Marino.

A private family memorial mass will be held on Tuesday, December 29, 2020 at 11:00 AM with Father Kevin Tumback celebrating. The mass will be live-streamed and may be accessed via Rel’s obituary on the Cornerstone’s website: www.cornerstonefuneralhome.com. The family will host a celebration of his life at a later date.

Rel will be laid to rest at Mountain View Cemetery.

For those who wish to share stories, memories, or photos with the Delbello family—please email remembering@aureliodelbello.com.