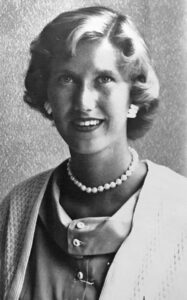 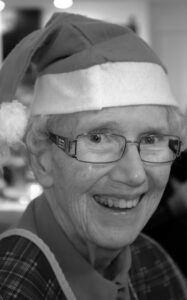 Born November 29, 1932, in Kitchener, Ontario, to a family of German heritage (Woeller), Sylvia became an avid swimmer and had memories of endless lessons, the key to future summer life-guard jobs. She often spoke fondly of spending summers at Georgian Bay with her brothers Michael and David. Sylvia graduated from Kitchener-Waterloo Collegiate in 1951 and later from McMaster University in 1954 (Arts). She subsequently attended the University of Toronto to complete a degree in social work (1955).

While working as a social worker in Toronto and attending a local conference, she met a tall, dark-haired man named Gordon. He quickly swept her off her feet with all of his clever stories and his prowess on the piano. Without waiting around, they got engaged two weeks after meeting and married on November 23, 1957.

Shortly thereafter, Sylvia and Gordon relocated to the prairies, with Regina being the first stop, and the arrival of new baby, Douglas (1962). With Gordon accepting the role of Principal of Selkirk College in Castlegar, BC, the family moved to the Kootenays for a brief stint. While living in Trail, BC, Darroch (1965) and Lachlan (1966) joined the family before they all relocated to Lethbridge, Alberta, where Gordon got a position with the new university in 1967. Ultimately, Janet arrived (1968), with the family established in Lethbridge.

For many years each summer, like a flock of migratory birds, Sylvia would drive the family vehicle (with two dogs) from Lethbridge to tiny Hornby Island, one of the Gulf Islands on Canada’s west coast. The family caravan went through Christina Lake, where the family stopped to visit Gordon’s relatives at their cabin. There was some reprieve from a hot car and family fusses while kids went swimming, fishing, and exploring. After a few days, it was time to continue the family’s Pacific journey. Sylvia enjoyed this arduous drive because of the changing colors of the trees in late summer, which reminded her of childhood memories from Ontario.

Upon arrival at Hornby Island, the family set up camp at Heron Rocks Camping Cooperative, where Sylvia loved reading books on a sandy beach or while sitting at the base of an arbutus tree. Periodically throughout the day, she would cast a casual eye upon the roving kids, preoccupied with shells and tidal zone creatures along the shoreline. This idyllic setting provided an outdoor daycare where there were lots of older kids to watch over the younger ones. There were also many intimate late-night discussions about family issues or social justice with a network of like-minded campers by the light of a Coleman lantern or adjacent to a beach campfire. Sylvia looked forward to this annual excursion throughout the year.

When the kids were almost old enough to fend for themselves, Sylvia took on teaching after earning a Bachelor of Education from the University of Lethbridge in 1979 (and winning the William Aberhart Gold Medal!). Sylvia loved working with adult First Nations students in Brocket, Alberta, while employed by the Lethbridge Community College. She was fascinated by their lives, stories, community, and perseverance. It was during this time that an interest in the environment blossomed. Sylvia got involved in numerous environmental initiatives of importance in Alberta while working as a teacher. She was a recycler before it was de rigueur and became the President of the Southern Alberta Group for the Environment (“SAGE”). Her old VW van was testament to her commitment, routinely crammed with a collection of flattened cans, glass, plastic containers, and bundled newspapers destined for the local recycling depot.

In 1982, Sylvia got a teaching job at Lethbridge Collegiate Institute (“LCI”), the high school that all four of her children attended. She received a Teacher-of-the-Year award in her first year on the job. Always trying to improve her Scrabble game, Sylvia went on to complete a Masters of Education from St. Francis Xavier University (1993), working on her studies at the end of the teaching day and in the summers, during her “time off”.

Sylvia was well-known for her formidable skills of debate and argument in many forums; She was a long-time member of the Raging Grannies, a group through which she worked to raise awareness of social justice issues related to peace, the environment, gender, human rights, world equality, Canadian unity and social programs. She also did some time in the trenches running for the Alberta legislature with the NDP, which took thick skin in the 80’s. She didn’t win, of course, but she put forth a valiant effort. In 2003, Sylvia was awarded the YWCA Woman of Distinction Award for her efforts at many of these initiatives.

After being diagnosed with Parkinson’s disease in 2007, years of living in a big house eventually got to be too much for Gordon & Sylvia. After a short time in a retirement facility in Lethbridge, Gordon & Sylvia left for the west coast in 2015, to be closer to children and grandchildren (JuJu in Vancouver and Aria & Lucius in Hong Kong), eventually settling into a care setting at Crofton Manor in Kerrisdale (Vancouver).

Sylvia was uncomplaining in the face of the ravages of a debilitating condition, which she ultimately succumbed to on August 1, 2020, with family members close-by and flowers next to her, as Gordon would have wanted. Sylvia was predeceased by her husband, Gordon (2017), and brothers Michael (Marion) and David (Elizabeth). She leaves behind four kids: Douglas, Darroch (Tamina), Lachlan (YanYan), Janet (Richard) and five grand-children (Aria, Lucius, Ava, JuJu, and Taliah). Sylvia also had a special place in her heart for her many nieces and nephews. She will be dearly missed by family and friends alike and remembered with great love and respect as an agent of social change that embodied the hope for a better tomorrow.

One Condolence for “CAMPBELL, Sylvia”