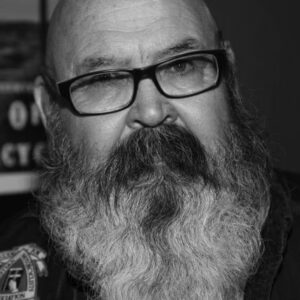 Roy was born in Lethbridge Alberta, he passed away in Glendale Arizona. Roy was predeceased by his parents Mike and Nellie Meroniuk and his older brother Allen. Roy is survived by his wife Gayla of over 41 years, his daughter Tammy Kemna, two sons, Aaron and Jaime Meroniuk, three stepsons, eleven grandchildren, three great grandchildren, his sister Doris Klotz, two nieces and one nephew

Roy was raised on the family farm west of Foremost Alberta. He worked for Noble Blade and Engineered Homes before going back to the farm to work with his father and brother. Roy had many artistic talents and enjoyed fishing and hunting.

In 2009, he and Gayla moved to Wellton Arizona where he enjoyed riding his Harley. He joined the CMA bike ministry and began taking pictures for the bike clubs. He also enjoyed hosting a large BBQ for the bikers and was known as The Good Looking Bald One. He will be greatly missed by family and friends.