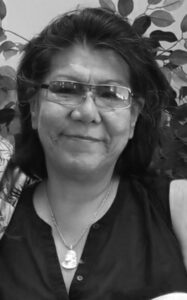 Corrine was born at the Blood Indian Hospital in Cardston, AB on June 19, 1961. Her parents; Mother, (the late) Leita Oka-Big Sorrel Horse and Father, (the late) Oliver Big Sorrel Horse. She was predeceased by her parents; brother, Ervin; sister, Brenda; daughter, Melani. Corrine is survived by her son, Jonathan BSH; grandsons, Juan GBSH, Dorian GBSH, Manuel MBSH, and James MBSH who are deeply saddened by her passing; her niece/adopted daughter, Cassie BSH (Martin), adopted grandchildren; Tristan ZBSH, Ciara SBSH, Jordan SBSH. Also Corrine’s sister, Marlene (Rick); nephews Joel Robinson, Kesley Soup, Zephryn, Hailey, Jaxon, Mya, Asher. Corrine was a kind, gentle woman. She liked to help people and that made her happy. She was an advocate to many people in Vancouver. Corrine worked with various native organizations in Vancouver to help people. Her job at Sheway as a social worker/counsellor was her favourite job. It was there that she reached out to help and support young native mothers and women. Corrine moved to Vancouver in February of 1992 with her family and there she spent time with her father, Oliver, until his passing in March 2007. Corrine loved her visits home and she enjoyed spending time with family. Corrine travelled throughout the Southern States, Montana, Washington and Oregon. She lived in Yakima, Washington in the mid 1970’s and in Dodge City, Kansas in early 1970 with her family. Corrine liked living in Vancouver. She liked all Vancouver had to offer, the many activities for her boys and the nice weather. Corrine will be sadly missed by all who knew her, especially her sons, niece, nephews, and sister; her uncle Delroy Oka; aunties, Patty (Cyril) Eagle Child, Mavis Oka, Mary Rose Many Chief; also her aunties, Odile Day Chief, and Bernadette Young Pine. A Funeral Service will be held at Legacy Funeral Home, Cardston on Friday, January 8th at 11:00 a.m with a viewing from 9:00 – 11:00 am. Due to COVID -19 Restrictions only 10 people will be allowed into the service at a time. Interment in the St. Paul’s Cemetery.