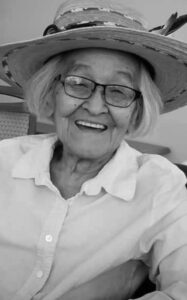 She resided in Hardieville and then Lethbridge until July 2018 when she moved to Calgary to be closer to her children.

Masa and her husband Shig were married in 1945 and were lifelong a ctive members of the Lethbridge Okinawa Cultural Society.

Masa was extremely competitive by nature. There wasn’t a contest that she wouldn’t enter and try to win be it diaper folding, Easter bonnet making, horseshoes or a three legged race! She was an avid bowler and member of the Alberta 5 Pin Bowling Association for 54 consecutive seasons and had been an awarded member of the 350 Club and 900 Triple Club on many occasions during her illustrious bowling career. She was particularly proud of competing in the Senior Olympic Games where she won a silver medal! Masa’s knife & chopping skills were unrivaled in the Japanese United church basement during the annual chow mein dinner making preparations where you could hear her knife working above all others! She was renowned for her skill and artistry as a cake decorator delivering ornate creations for weddings, birthdays and all types of special occasions.

She will be remembered for her hard work ethic, her love of “good music” generosity, delicious cooking and her desire to feed everyone! If you left Shig & Masa’s house hungry, well, that was your own fault!

A celebration of life will be held at a later time and date in Lethbridge once the restrictions of COVID-19 have been lifted to allow an appropriate gathering of loved ones and to celebrate her life well lived! We’ll miss you mom!

In living memory of Masa, a tree will be planted in the Ann & Sandy Cross Conservation Area by McInnis & Holloway Funeral Homes.