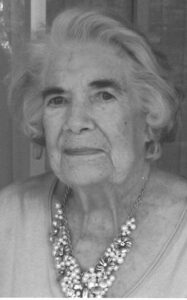 It is with sadness and love that we announce the death of Joyce Arnold, beloved wife of the late Millar Arnold, on January 4, 2021, at Extendicare Fairmont at the age of 94.

Joyce is survived by her son Dalton (Diana); grandson Erik, of Lethbridge; son Bob, of Calgary; brother Bob Sproule (Cheryl) of Melfort, Saskatchewan; sisters Isla Lustig of Prince Albert, and Hazel Gordon of Prince George, as well as numerous nieces and nephews and their families.

She was predeceased by her parents Herbert and Jennifer Sproule, of Melfort; sister Dorothy Mather of Calgary and Shirley Glass of Prince Albert.

Joyce was born on the family farm west of Melfort, Saskatchewan to Herb and Jennifer Sproule. Because of severe allergies to farm animals, Joyce attended elementary school in Prince Albert, living with her Grandma Plaxton. Her family then moved into the town of Melfort and she was able to complete her schooling while living at home. In 1945 she moved to Calgary where she lived with Mr. and Mrs. Coombs while working as a pharmacist’s assistant at McDermid Drug. There, she met pharmacist George Willoughby and his family, and moved with them to Ponoka in 1947, where George managed Byrd Drug and Joyce worked in the store. After six months they all moved to Lethbridge, where George was a partner in Willoughby McDermid Drug Store. She began her studies at the University of Alberta in 1949 in the faculty of Pharmacy, but was unable to complete her exams due to illness. She returned to Lethbridge, and while working in the drug store, Joyce met former Mountie, Millar Arnold. They were married in 1951 in Calgary.

Joyce was one of the early residents on the second floor of the newly established YWCA Residence from 1950 to 1951, where she was an active participant in both social and community programs. After their marriage, Joyce and Millar continued to be active in the community. They developed lifelong friendships with their neighbors on 15th Avenue. Joyce loved to entertain friends and family.

When Joyce and Millar’s sons were in school, Joyce attended the University of Lethbridge, completing her B. Ed, and teaching at Agnes Davidson Elementary School for six years. She loved being a teacher and was sorry that her career was cut short due to her asthma.

Joyce and Millar loved to travel, first in a travel trailer with their sons, and later on tours to Australia and Europe and many wonderful cruises. They enjoyed a winter home in Palm Desert for over 30 years, where they hosted many friends and family. Summers in Lethbridge meant many hours enjoying golf at the Country Club and visits to their farm near Pincher Creek.

Joyce believed in community service and was active in both her church and other community organizations. She was President of the YWCA Board of Directors in the early 1960s and played a strong role as a Team Leader in the Building Campaign for the new YWCA in 1980-82.

Joyce was a beautiful woman who shared her kindness, warmth and generosity with so many. In her later life, she knew all of her caregivers by name, and listened with sincere interest to their stories about their families, remembering to ask about their children by name. She loved her years in Martha’s House where she enjoyed friends, old and new. She arranged bridge nights for the men and taught another friend to play crib. She will be missed by all who knew her.

A private family Graveside Service will be held, with a celebration of life planned for June of this year 2021.

Flowers are gratefully declined. For those who wish, memorial donations may be made to the YWCA Lethbridge and District, 604 8 St S, Lethbridge, AB T1J 2K1.