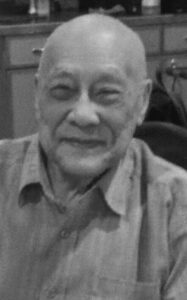 All Eng Shee and Ken’s children were born at home, delivered by Dr. Hammond. When Alec was 9 years old, his mother took his siblings to China to get some Chinese education and left Alec to keep his Dad company. Unfortunately, it would be another 10 years before his mom and siblings were able to return home because of the Japanese invasion of Hong Kong and China. Alec took it all in stride, attending school and helping his Dad in his grocery business, J.K. How Foods. In 1946, Ken gave the keys to the business to his three sons as he wanted to move back to China. From then on it was a very successful partnership and the store was expanded to become How’s IGA Foodliner in 1963. When the IGA was sold in 1975, Alec worked for several years as the night manager at the Heritage Inn. This suited him very well as he was well known as a night owl. A few years later, Alec, his nephew, Alan How, and Alan’s wife Fawn, formed a partnership and opened a restaurant called the Golden Pagoda (largest restaurant at the time) which also was the Greyhound Depot. Alan and Fawn cooked and ran the restaurant. Alec was responsible for the front of the house, the depot and the accounting. The business thrived until Alan and Fawn moved to Calgary in 1992 to be with their sons and other family. Alec retired at that time.

Alec was a lover of sports, mainly from his armchair. However, he started the Taber Badminton club in the early 60’s. He rented the high school gym two evenings a week and there were people waiting their turn to play almost all the time. The club was very popular for several decades until Alec retired from play when he was well into his eighties! He was also an early women’s libber: on behalf of IGA, he sponsored a women’s softball team in Taber called How’s Hustlers.

Alec lived humbly and frugally, though he did enjoy flagship sedans, buying a new one every few years. But after retiring, he gave up his leather seats for an average family sedan and he lived in the same house for over 50 years.

Alec was a voracious reader, subscribing to several magazines and taking books out of the Public Library. His daily routine was having a small breakfast at MacDonald’s, visit with friends if they happen to be there, and then return home to read, work on word find or crossword puzzles, play computer games, or watch game shows. Alec also loved to play card games and board games with relatives and family friends.

Alec also loved music. His customer’s enjoyed the easy listening and jazz music piped throughout the store. He had a very large library of LPs, cassette tapes and CDs and his tastes ran from Nana Mouskouri to Shania Twain!

Although Alec never married, he had strong family ties with his brothers, sister and their families. He was also very close to the Lorne Fong family and was included in many facets of their lives. In essence, they were his second family.

Farther from home, Alec had also enjoyed trips abroad sponsored for IGA owners. He regularly went on car trips to destinations mainly in the US with his extended family and the Lorne Fong family. He especially looked forward to his trips to Reno.

He found faith in Jesus late in his life and appeared to be at peace in his final years. He passed away quietly in his sleep on January 4, 2021

He will be very much missed by his many nieces, nephews, great nieces, great nephews, and one great great niece.

Due to COVID-19 restrictions, a celebration of his life will be held at a later date.

Alec’s family would like to extend our sincerest thanks to the staff of Fairmont Extendicare for their exemplary care of Alec over the two years that he lived there.