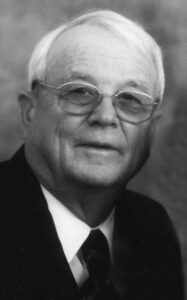 EVANS, Evan William from Lethbridge formerly of Nanton passed away at St Michael’s hospital on January 8, 2021 at the age of 93.

Evan worked for 13 years as Service Manager at McKay Brothers John Deere and then at Lethbridge College as a Agricultural Mechanic instructor for 15 years.

Evan loved to restore antique cars and tractors. He travelled many miles with Dorothy and the family in their 1937 Chev and his totally restored 1947 Desoto to car meets in Canada and the United States. He was a long time member of the Lethbridge antique car club and the Red Deer car club. Evan was one of the founding members of the Prairie Tractor Club at Picture Butte. He also owned and restored a 1931 Rumley tractor. While in Nanton he was a volunteer fireman and deputy fire chief. He was a life member of the Nanton Masonic Lodge.