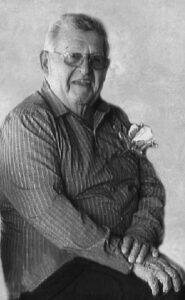 It is with great sadness that we announce the passing of BARRIE LYLE SIMPSON at the age of 87 years. He died peacefully at home in Lethbridge, surrounded by his loving family.

Barrie was born in Vancouver, B.C. on October 17, 1933 to parents Percival and Zena Simpson. He had a special bond with his grandfather and learned his strong work ethic from him. He was employed by the B.C. Telephone company where he retired after 37 years of service. In his retirement Barrie enjoyed spending time on Kootenay Lake boating with his beloved dog Bailey.

He married Twyla Louise Bloom on November 8, 1963 in Nelson, B.C. They went on to raise their family in the small town of Riondel, B.C. He was always involved in community service and he was a big humanitarian.

Predeceased by his parents, and brother Wally Simpson, and survived by sisters Shirley Weins (and her daughters Sherri & Debby), and Marsha (Larry) Lambrecht (and their son Jason).

He was the rock of our family. He was not big on hugs but gave the firmest hand shake, which the grandkids would override with a big smooch on the cheek. Proud, private, humble and dignified, he was everything to everyone. Ever the problem solver, he knew each person’s strengths and talents and when to call on them in times of need.

Always a champion for the underdog, he never placed much value on social status. For him, integrity and being there for your fellow man was paramount. This belief system was instilled in his children and grandchildren and is his greatest legacy.

In lieu of flowers and in memory of Barrie, donations may be made to Stars Air Ambulance (stars.ca/ways-to-donate/ab/)