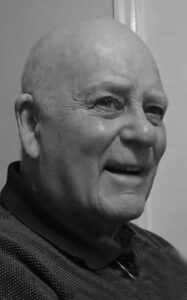 Mr. Stanley Carmichael of Lethbridge, beloved husband of the late Mrs. Joyce Carmichael, passed away at Chinook Regional Hospital on Sunday, January 10, 2021 at the age of 88 years.

Stan had a difficult start as a foundling as he was raised in an orphanage. He went on to serve his country, and marry his beloved Joyce Stuckart, and they raised two children who made him tremendously proud in their banking careers.

Stan umpired baseball and softball for 30 years. He refereed hockey at all levels for 25 years. He officiated high school and minor football league games for a decade, and he was an off-ice official with the Lethbridge Broncos and Hurricanes for 22 years. Called one of the ‘forefathers’ of Lethbridge Minor Hockey, Stan supported the sport as a referee, linesman, minor hockey executive, scorekeeper and devoted parent and fan.

He was actively involved with minor hockey, junior hockey and the WHL for five decades and received the Tom Foley Memorial Award for “Sportsman of the Year.”

In 1985, he was in the first cohort inducted into the Lethbridge Sports Hall of Fame. In 2007, he was honoured with the Hockey Alberta Centennial Award.

Stan was a Canadian Armed Forces veteran of the Korean War. With the Princess Patricia’s Canadian Light Infantry, he earned his parachute wings. A bugler, he served as a stretcher bearer, clearing the dead and wounded from the field.

Once President of the General Stewart Branch of the Royal Canadian Legion, “Stan Carmichael has touched the lives of thousands of southern Albertans,” wrote Gary Allison of the Lethbridge Herald.

In 1992 Stan returned to Korea and stood in the same spot in the United Nations Memorial Cemetery at Pusan where he had played Reveille and the Last Post. He was one of 100 Canadian Korean veterans invited to Washington, D.C. for the unveiling of the American Korean War Memorial.

Stan was predeceased by his beloved wife, Joyce, and his son-in-law Ivor Carleton, and his daughter-in-law, Ann Hermanson Carmichael.

Fond memories of times spent with his family will warm and provide a measure of comfort.

In lieu of flowers, donations in memoriam could be made to the Cancer Society or another charity of one’s choice.

Interment will be at a later date at Mountain View Cemetery in the Field of Honour.

Funeral arrangements will be announced when completed.