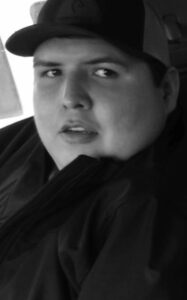 TERRY LANE MANY FINGERS (Pa’ naotoo) passed away suddenly on January 7, 2021 in Claresholm, Alberta at the age of 26 years. Terry was born February 11, 1994 in Lethbridge, Alberta to Ivan and Verna (nee Creighton) Many Fingers.

At a young age, Terry grew a strong interest in vehicles, cattle and heavy equipment, often showing mom and dad pictures of what he was going to do and purchase. Terry had plans & dreams. In 2014, Terry was in an accident, even though his injuries were so severe he did not give up, he had ambition and he dealt with his hardships, as he had a brilliant future planned. Through Terry’s hard work and determination to become self sufficient in ranching and running heavy equipment, Terry was working on his plans and dreams to come true.

Terry was a kind, humble, very good hearted giving person, he had a big heart and caring nature who always welcomed you with a big smile. Terry’s bond with mom was strong, often sitting beside her telling secrets, laughing and making sure mom was okay. Mom always told Terry to be kind and help those in need. Terry listened to mom’s words and was often seen helping those in need; he was very passionate about the youth. Terry’s kind heart, smile, and sense of humor will forever be missed by all who knew him. Terry cared for and loved mom and dad so much.

He enjoyed our annual family trips and left us with many happy memories to look back on.

Terry spent this past year with his special friend, Talyssa Vielle, the two became inseparable. Terry was loved and brought joy to many family and friends young and old, he will be greatly missed by his Many Fingers, Creighton, White Quills and numerous other relatives

A Viewing will be held at Legacy Funeral Home, Cardston on Tuesday, January 19th from 9:00 – 11:00 am with a Family Service to follow at 11:00 am. Due to COVID -19 Restrictions only 20 people will be allowed into the service at a time. Interment in the Blood Band Cemetery.