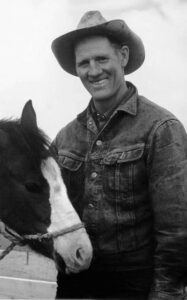 HOWARD SKOUSON HICKEN
AUGUST 24, 1919 – FEBRUARY 16, 2021
Howard Skouson Hicken was born to pioneer parents, Ruth Skouson and Albert Hicken, in Raymond, Alberta. He was one of ten children and grew up on the farm near New Dayton, where he began his schooling. The Hicken family moved to Raymond where Howard finished school at the Knight Academy. He made lifelong friends known as the “S Men”, who fondly called him “Skous”. “Skous” was naturally athletic, excelling in track and field and basketball for the Union Jacks. Howard attended Olds College to learn the latest in farming and veterinary science. Howard was a whiz and being the kind of man who could do anything, he completed the two year college course in one year.
On June 1, 1942, Howard joined the service and became an Air Force bomber pilot in England. He was awarded the Distinguished Flying Cross for successfully completing 31 bombing missions. The London Gazette reported, “Throughout his tour Flight Lieutenant Hicken has shown himself to be a cool, resolute Captain who can be relied upon [and] displayed the utmost fortitude, courage and devotion to duty.” As one of the last surviving WWII veterans, Howard will be missed as an esteemed member of the community.
Howard was blessed as a young boy that God would always protect him over the land, over the sea and in the air. This proved true. He returned safely home from the war and fell in love with a beautiful gal from Montreal nicknamed “Whistlebait.” Howard and Ethel Wilson were married October 9, 1948 and moved to the farm. They were blessed with nine children and also helped raise two nephews. Howard adored Ethel and was her biggest fan as she played piano with The Raymond Canadians. Their huge family became “The Hicken Herd” and Howard said the best crop he ever grew was his family.
Howard was well known in the community and was a Scout Master, Rotarian, and avid Comet fan. He watched his children, grandchildren and great grandchildren play for the Raymond Comets and continued climbing the bleachers until he was 101 years of age. Howard’s favorite things included hunting, fishing, silver dollar pancakes, Kananaskis, Dutch Creek, horses, the Milk River Ridge, horseshoes, dominoes, Coke, numbers, sewing leather, weekly temple visits, cutting hair, reading, John Wayne movies and making Ethel laugh. Howard loved planes and flying and spent years building a Glass Air 2 airplane with his son, Tommy. Howard and Ethel served a family history mission for The Church of Jesus Christ of Latter-Day Saints in Salt Lake City.
How can a man live for over 101 years and not make a single enemy? Howard’s Christlike love for every person he came in contact with no matter how they might appear to others, will live on as his legacy for generations. With Ethel by his side, Howard left this world peacefully and with the same grace he lived his life.
Howard was predeceased by his parents, siblings, daughters Peggy Baldry and Maureen Hicken and granddaughter Miranda. He is survived by his loving wife of 72 years, Ethel Wilson Hicken; children Stephen (Darlene) Hicken, Joan (Bruce) Harker, son-in-law Roger (Peggy) (Karie) Baldry, Jeanne (Wallace) Stone, Thomas Hicken, Brian (Jackie) Hicken, Patrick Hicken, Michael (Tracy) Hicken; nephews Randy (Kerry) Hicken and Mark (Joni) McArthur. Howard and Ethel have 52 grandchildren and 126 great grandchildren.

A Private Service will be held on Sunday February 21, 2021 at 4:30pm, to view the livestream please visit Salmon and Sons website.