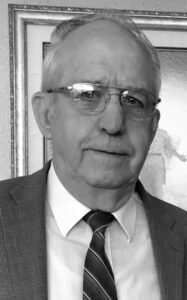 ALLEN KENT PITCHER, beloved husband of Donna Pitcher passed away suddenly and unexpectedly in Calgary, Alberta on February 21, 2021 at the age of 79.

Kent was born in Cardston, Alberta on May 23, 1941. He was the fourth child of Willis and Ethel Pitcher. Kent was predeceased by his parents and his two sisters, Charlene Shields and Karen Scanlon, and his youngest brother, Dee Pitcher. He is survived by his oldest sister, Rhea Card, and his older brother, LeRon (Sharon) Pitcher. He is also survived by five loving sisters-in-law: Della (Jim) McLean, Dixie (Ray Barr) Diebert, Darlene (Tom) Scott, Debbie (Bob Mantler) Zuback, Dorsey (Jim) Jaworsky who looked to him more like a big brother than a brother-in-law.

Kent lived on a farm south of Cardston until he was ten. In 1951, they moved into town. He graduated from Cardston High School in 1959, then left to serve a mission for the Church of Jesus Christ of Latter Day Saints in North Carolina and Virginia. After returning from his mission he married his highschool sweetheart, Donna Diebert in the Cardston Alberta Temple on May 4, 1963. He started his career in the teaching profession. He taught in Del Bonita, Grand Prairie, and Mountain View. After Kent had taught for a couple of years, he joined Pitcher Realty, with his brother and dad. But in 1971 an opportunity came to rent a farm in the Woolford District and thus began his farming career. Kent’s passion was farming. He loved planting crops and calving out cows. He loved the feel of the soil and was a diehard farmer and rancher to the very end. He especially loved his Maine-Anjou cattle. He often commented that they would be the only breed of cattle allowed in heaven.

Kent was a lifelong member of the Church of Jesus Christ of Day Saints. He loved his Savior and was always looking for ways to stay in His service. He served as a bishop of the Aetna Ward, later on the high council and many other church callings. Some of his greatest memories were made with his favorite companion, Donna on their two missions to Ireland and Cove Fort. Those 6 months in Cove Fort felt like a Zion experience for them and for all the missionaries they served with. He also truly enjoyed his five years as director of the Cardston Temple Information Centre and later as service missionaries there. At the time of his passing Donna and Kent were currently serving together in the Chinook Lodge Branch.

He leaves to mourn his wife of 57 years, Donna and their six children: Gregg and Donna Pitcher, Tim and Beth Pitcher, Shawn and Patty Pitcher, Dan and Jen Pitcher, Angie and John Bennett and Tiffany and Michael Spencer. Along with 28 grandchildren and 6 great-grandchildren, whom he loved and was very proud of. We know he was greeted by his two sweet great-granddaughters, Merida and Eliza who preceded him

Friends may meet the family at the Temple Street Chapel, Cardston on Friday, February 26th, from 6:00 to 7:00 p.m.

A Private Family Service will be held at Legacy Funeral Home on Saturday, February 27th, at 2:00 pm. Interment in the Cardston Cemetery.