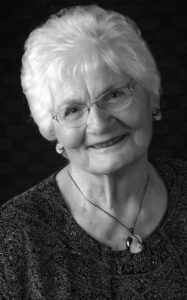 Millie Ponjavic (nee Bebek) of Coalhurst, beloved wife of the late Ivan Ponjavic, passed away at St. Michael’s Palliative Care Centre in Lethbridge on Friday, February 26, at the age of 94 years.

Millie was born on September 29, 1926 in Sipovaca, Hercegovina, Yugoslavia to parents Jurka Zivkusic and Jure Bebek. Jure immigrated to Canada in 1928 and Millie and the Bebek family joined him in 1937 in Raymond, Alberta. Millie was 11 years old when she arrived in Canada, the youngest of five children.

She attended school in Raymond, Stirling, and Picture Butte while she worked on the family farm in the Raymond and Picture Butte areas. After a short stay in Kamloops to help with the family orchard and farm, she returned to Picture Butte to live with the Lukendas. Millie moved to Lethbridge to work as a nanny and maid and then at McGavin’s Bakery. Millie and Ivan met in downtown Lethbridge through a friend. Millie and Ivan were married in 1952 and moved to the family farm located near Coalhurst where she continued to live for 68 years.

Millie’s interests included sewing and embroidery, raising a vegetable and flower garden, going to aquafit, and decorating cakes for her children and grandchildren. She could fix just about anything if it saved her money. Millie’s life revolved around her family. She loved organizing and attending family celebrations, picnics, and reunions. Millie was an active member of the CWL and the Croatian Club. Thursday coffee day and Sunday mass were highlights of her week. She enjoyed travelling with her family and visiting relatives in British Columbia, Croatia, and California.

She is also survived by her loving sister and best friend, Andrea Habijanac and forever grateful for her close friendship with the Kadezabek families.

A special thanks for the excellent care given to Millie from the staff of the Chinook Heart Clinic, Dr. E. Janzen and the nurses, AHS Homecare, the caregivers at Lethbridge Family Services and St. Mike’s Palliative Care Centre.

A private Prayer Service will be held at 7:00 PM, Friday March 5, 2021 at Martin Brothers Riverview Chapel, Lethbridge, Alberta. The family invites those who wish to watch the service via livestream at https://www.mb funerals.com/obituary/Millie-Ponjavic and scrolling to the bottom of Millie’s obituary.

A private Funeral Mass will be held at 11:00 AM, Saturday, March 6, 2021 at St. Martha’s Roman Catholic Parish with Father William Monis, celebrant. The family invites those who wish to watch the service via livestream at https://www.mbfunerals.com/obituary/Millie-Ponjavic and scrolling to the bottom of Millie’s obituary.

In lieu of flowers, please direct donations to “Brain Diseases Research in Neuroscience” at the University of Lethbridge in memory of Millie Ponjavic, online at go.uleth.ca/give or by mail to University Advancement, A735-4401, University Drive W. Lethbridge, AB T1K 3M4 or by calling 403-329-2582.