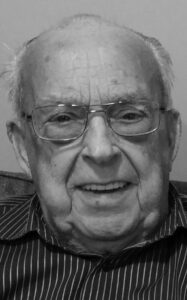 On Thursday, February 25th, while he was enjoying his regular afternoon nap at his home in Calgary, Wayne Holland quietly slipped through the veil to meet his parents, Ruby and Josiah (Mike) Holland; son, Stewart; sisters, Wanda McKean and Nadine Brown; daughter-in-law, Debra (Donick) Holland and son-in-law James Olson.

Wayne was born and grew up with six siblings in Raymond, Alberta, where he attended school and served a short time in the Canadian Army. He met his wife Joyce Lindseth in Raymond and they were married in 1947. They moved to Taber in 1949 where Wayne was employed at the new Roger’s Sugar Company plant for their first sugar making run in 1950. He worked for this employer until his retirement.

During retirement years, Wayne built and equipped a woodworking shop in his back yard in Taber, where he taught himself the art of woodworking, making many beautiful projects for his family and the neighbors over the years. During this time, he and Joyce turned their time to working at the LDS Alberta Temple at Cardston where they made many more friends. With family grown and as empty nesters in 2002, they moved to Lethbridge and began travelling, usually with their kids, and visited many interesting countries in the world. When health issues became problematic, Wayne and Joyce opted to move to Calgary to St. Marguerite Manor.

Wayne is survived by his wife of 73 years, Joyce; their children, Douglas (Valarie Shockey), Phillip (Heather Boyle), Michael, Stephanie (Darrel) Orr, Wendy (Robert) Krause, Sandra, Karen; 21 grandchildren and 21 great grandchildren. The family wishes to thank the care givers at St. Marguerite’s Manor for their patient and compassionate care of our husband and father. Your kindness to Wayne was very much appreciated.

Due to Covid restrictions there will be no service at this time. Cremation has been entrusted to Choice Memorial Cremation and Funeral Services. To view and share photos, condolences and stories of Wayne please visit www.choicememorial.com.

One Condolence for “HOLLAND, Wayne”