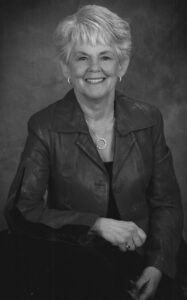 Margaret (Marnie) Hubber passed away peacefully at home on Saturday, March 6th, 2021 after a hard-fought battle with Lewy Body Dementia. She was predeceased by her fishing partner, husband, and best friend Robert (Bob) Hubber in 2001.

Marnie was born in Hamilton, Ontario on September 16, 1941. She married her high school sweetheart in 1962 and they began their adventure together in Alberta. Bob’s career with the R.C.M.P meant they raised their daughters in several communities across the province including Wetaskwin, Olds, Provost, McLennan, and Lethbridge.

After she lost her husband in 2001, Marnie devoted herself to her family and to several elderly friends who she supported with rides to appointments, invitations to family events and caring companionship. She was active in her church (St. Augustine’s), in the Order of the Eastern Star (Maple Leaf Chapter) and was a long-time volunteer at the Chinook Regional Hospital in the cancer centre.

Marnie will be remembered for her ability to rebuild after significant losses including the early and unexpected deaths of her father, her brother Greg and her husband Bob, for her courage as she faced a life altering diagnosis with Type 1 diabetes in 1964 and the uncertain certainties of her dementia diagnosis in 2017, for her dedication to her family and friends and for her amazing chocolate chip cookies and her delicious apple pies.

A private family graveside service will be held on Thursday, March 18, 2021, with the Reverend Steve Bateman officiating. As per her wishes, Marnie has been cremated and will be interred with her husband in Mountain View Cemetery.