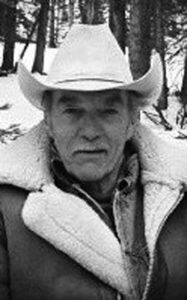 In life, we loved you dearly, In death we love you still.

It is with great sadness that we announce the peaceful passing of Robert BRYAN Robertson at sunset on the 5th of March at the Chinook Regional Hospital. For 37 years, he was the dear friend and beloved partner of Joanie Freeman.

Bryan was born in Pincher Creek, June 1, 1940. He was raised for a time in Willow Valley attending, on horseback, the one room North Fork School a couple of miles down the road from their home. The family also lived in Lundbreck, Bellevue and Behrens for a time. In the fall of 1959 Bryan and his father drove to SAIT to register him in a finishing carpentry class. That class was full, but they were offering a brand new course in Petroleum Technology in which he enrolled. After Graduation, Bryan took a job with the Energy Resource Conservation Board, making lifelong friends. He married his love, Virginia June Holman in September of 1962. They settled in Calgary with their two children Warren and Jan. Bryan took a position with Elf Oil, the French National Oil Company and became their Arctic Operations Manager. The family moved from the city back to Willow Valley in 1977. In 1981, he bought Narwhal Artic Services – Narwhal managed the airport, the hotel, supported the town of Resolute Bay, and handled logistics for the mines and drilling companies. Bryan also consulted in Arctic ventures in Russia, Greenland and Finland. His company Amarillo Holdings took part in projects offshore in Labrador, Newfoundland and northern Europe. Another subsidiary, Champion Oilfield Rentals, offered leased and rented heavy equipment in order to complement the support of the Arctic frontier explorations. In 1983 tragedy struck, and Bryan lost his wife in a car accident.

Bryan began ranching in 1986 and following the sale of the Arctic company in 1991, Bryan settled into the Ranching community – taking part in Rocky Mountain Forest Range Assoc.; North Fork Livestock Association; he registered water rights for the ranch and grazing associations. He was proud of the integrity both his Gelbvieh herd and later his Black Angus. Briefly Bryan dabbled in the fickle Ostrich market, then went on to residential property development in Bellevue.

Bryan was afflicted with Rheumatoid Arthritis – a brutal, debilitating disease – he has been described as brave and courageous by medical staff. He never complained. He never bemoaned his lot, kept his humor, a little sass and enough flirtation to charm everyone whose path he crossed.

Flowers are gratefully declined. Those who wish, memorial donations may be made to STARS www.stars.ca, or the Arthritis Research Center at 5591, No 3 Road, Richmond BC V6X 2C7

A celebration of life will be held at a later date.

One Condolence for “ROBERTSON, Bryan”