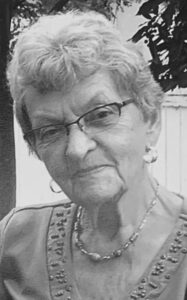 She is preceded in death by Brothers and Sisters In Law: Don Walters, Margaret Sirovyak, Jessie and Eivind Trockstad, Robert Christie and Evelyn Martin.

Phyllis grew up on a potato farm in Portage La Prairie, Manitoba where they sold their produce to Campbells’s soup. After school, she started work at Eaton’s store. She moved on to Winnipeg and worked at Eaton’s catalog before moving to Lethbridge. She met Bill when he was in the Air Force, they married and had two sons. She was a member of the St. Basil’s Catholic Church where she attended every Sunday. She enjoyed weekly visits from her children and grandchildren. She looked forward to her weekly coffee with longtime friend Cathy Crighton after their retirement from Sears. Phyllis spent special occasions with her brothers and sisters and was famous for her cabbage rolls, pyrogy’s and borscht. Thank you to their great neighbors Jack and Sharon Van Tol for all of their help in enabling them to stay in their own home for so long. Thank you to the hospital staff for her care and the compassion they showed.

No service will be held as per her wishes. Cremation by Evergreen Services.