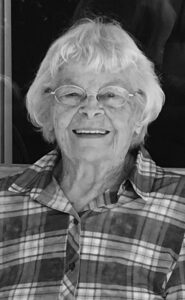 She is survived by her son, Lyle Drozdowski (Sue Meredith) of Lethbridge, Alberta, her granddaughter Kelsey Meyer (Rohn Meyer) and great grandson Conrad, and her grandson, Kevin Drozdowski (Ashley Yaremko), all of Calgary, Alberta. She is also survived by nieces, nephews and cousins, in Canada and in Denmark.

She was predeceased by her husband, Stanley Drozdowski, and by her parents, Lars Peder Pedersen and Wilhelmine Kristine Pedersen (née Nielsen), of Swift Current, Saskatchewan.

Wilma was born January 18, 1927 in Swift Current, Saskatchewan as a first-generation Canadian. She was proud of her Danish-Canadian heritage and of her homestead upbringing in Neidpath, Saskatchewan. She was talented in horsemanship, and rode her Shetland pony, Rex, to school at the one-room schoolhouse near the community each day. Upon graduating high school from W. A. Beatty Collegiate in Swift Current, she attended and graduated from the Yorkton Hospital nursing program. She met her husband, Stan, at a New Year’s Eve dance in 1947. After a long distance romance while she completed her nursing training in Yorkton, Stan and Wilma were married on October 18, 1950 at First United Church in Swift Current. Their son, Lyle, was born in 1951. Wilma lived in Swift Current until 2019. She worked as a registered nurse for about 40 years. She became the head nurse of the operating room at Swift Current Union Hospital, and then worked in long term care at the Palliser Hospital until her retirement. In 1986, she was recognized with an award from the Canadian Red Cross Society for her thirty years of volunteer service in coordinating blood donor clinics. In 1992, she was awarded the Commemorative Medal for the 125th Anniversary of the Confederation of Canada in recognition of significant contribution to compatriots, community and to Canada.

Wilma and Stan loved camping, fishing, square dancing, playing cards, and spending time with family and friends, whom they treasured. She was a devoted daughter, wife, mother and grandmother and a lifelong friend. She visited family in Denmark and enjoyed taking family visiting from Denmark on sightseeing trips in Canada. Wilma was a dedicated member of Grace United Church in Swift Current. In 2019, she moved to Lethbridge, and enjoyed meeting many new friends at her new home at the Seasons Lethbridge Gardens. She quickly became part of a new family there, enjoying book club, 4th floor exercises with the gals, coffee and card games. She always had a beautiful smile, and a warm heart. She will be dearly missed by her family and many friends.

Arrangements are entrusted to Cornerstone Funeral Home. A celebration of life will be held at a later date.