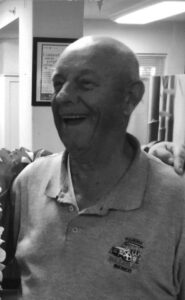 Rense was a professional bullsh***er. He loved fast cars and motorcycles, wrestling (especially the female wrestlers). Known as the Captain of the Ship, and mom as his cruise director, he always was ready to leave on a whim when she had the bags packed. He excelled at flipping the bird, taking no crap, and laughing at inappropriate jokes even though he could not hear a word. Rense had a busy life but no matter what he was doing he always took time to teach his kids life lessons. You’re now on the upper floor joining Nelly, the love of your life, and son Robert along with many other angels: his parents Siebren and Reino Visser, four brothers, John, Rinky, Jim, and Peter, sisters-in-law, brothers-in-law, and his son-in-law Marvin Wichers. He leaves on this side of the “ground floor” as he would say, his daughters, Lilly (Jeff), Debbi (Marvin, deceased), Peggy (Rick), his sons, Sid (Heather), Steve (Lisa), along with 15 grandchildren, 29 great- grandchildren and one great-great-grandchild, his sister, Renske and brother Teddy (Anne), sister-in-law Joanne Berlinghof and brother-in-law Gerry VanGaal, along with several nieces and nephews. Anyone who knew DAD knew his favorite quote “Live HARD, die fast and leave a happy memory”. That he did! If Rense could tell us anything, his last inappropriate joke would be” In lieu of flowers, please send cash as I did not leave my kids a damn thing!”

Cremation has taken place. Rense will be laid to rest in a private interment at a later date.

One Condolence for “VISSER, Rense”