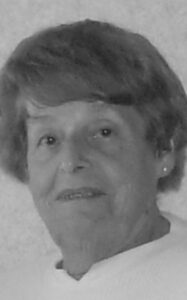 Marie passed away at home with her family by her side after a short illness. Marie was born on the family farm in Tilley, Alberta to George and Magdolin Szakaly, and was raised in Lethbridge and Calgary. Her secretarial career took her first to Eastern Canada and then to Vancouver BC, where she met and married Gerald, her husband of 59 years. In 1962, six months after their marriage, the couple followed their dream to move to California. They settled in the San Francisco Bay Area where their two children, Kenneth and Catherine, were born. In 1964 Gerry’s career took them to Stockton California, where Marie was kept busy raising the children, and among other things sewing their clothes, being a Cub Scout Den Mother and coaching girls’ softball. Her many other interests included macrame, cake decorating, bowling, boating, travelling in the family’s motorhome and many trips to Canada and Hawaii. After the children were grown, Marie became a successful Century 21 Real Estate Agent until 1980, when the couple co-founded Galaxy Rental and Party store in Stockton, which Marie managed for 25 years. In 2019, after 14 years of retirement and the death of their daughter Cathy in 2016, Marie and Gerry moved to Foster City, California, to be closer to their son Ken, who lives in nearby Half Moon Bay.

Marie was predeceased by her daughter Cathy; her parents; brother Joe Szakaly; and two sisters, Irene Miklos Ross, and Pat Szakaly. She is survived by and will be sadly missed by her Husband Gerry; Son Ken (Lori); and three Grandchildren, Nic and Chris Wilson in California and Ryan Wilson (Sara Ann) in Indiana. In Alberta, she is survived by nephews Garry (Cathy D’Andrea) Miklos and George Miklos, niece Janet Miklos (Blaine) Barr, sister-in-law Myrna Phillips Szakaly Gehrke, and nephews Geordie (Karen) Szakaly and Garth (Connie) Szakaly, as well as by many great and great-great nieces and nephews. She will be missed, but never forgotten.