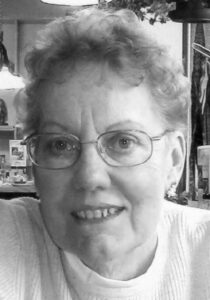 Marie Lewis, beloved wife of predeceased R.G. Dick Lewis, of Lethbridge, AB, passed away on Saturday November 20, 2021 at the age of 86 years.

Marie was born in Lethbridge, AB on July 5, 1935. She married the love of her life, R.G. (Dick) Lewis in September of 1955 and they subsequently left to take up residence in Edmonton, AB. Marie had two boys, Greg and Glenn while in Edmonton before they were transferred to Regina, SK. There Marie became a telephone operator with SaskTel and took up her passion of curling. She had another son, Trevor, in Regina before the family was transferred back to Lethbridge in 1972. Marie then began working for AGT and it was Lethbridge where she and Dick had hoped to retire however, another transfer brought them back to Edmonton in 1975. Marie retired from the Data Design Engineering Team at AGT / TELUS in 1993. She and Dick enjoyed many winters snowbirding in Yuma, AZ. They finally settled back in Lethbridge to rekindle their lifelong friendships.

Marie was predeceased by her husband R.G. (Dick) Lewis, her parents John W. and Jeanne E. Clancy as well as her older sister Eileen Anna Clancy.

Memorial Services will be held at a later date.

If friends so desire, memorial tributes may be made to Muscular Dystrophy Canada (www.muscle.ca).

One Condolence for “LEWIS, Marie”

Leave a Condolence for Wally Schenk