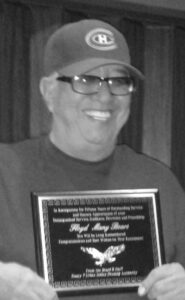 It is with great sadness that we announce the passing of FLOYD BRUNO MANY BEARS, beloved husband, father, grandfather, great-grandfather, brother, uncle nephew and cousin, at the Kainai Continuing Care Centre, on Thursday, January 6, 2022 at the age of 77 years.

Floyd (Bruno) Many Bears was the third child born out seventeen children to Jack & Margaret (Weasel Head) Many Bears. He had the reputation of a hard worker and that he was. Beginning with his chores, working on the family farm helping his dad with the labour it takes running the ranch, such as haying, chopping wood, hauling water from the river, breaking horses, etc. He carried that strong sense of the value of hard work into his career as a telecommunication specialist with AGT that became Telus. His value for intensive labour and hard work did not stop there and after retirement took on various jobs as a consultant and physical labourer. Bruno being a hard working man he was very dedicated to his job, he was often referred to as the AGT man by the Cardston county and the Blood Reserve whom would often contact him for communication repairs and technological maintenance. If he was not found at his home you can find him at his mother’s place (Kaahkaanii) Margaret across the coulee, where he would be having tea always appreciating her company, whom he loved very much. In 1994 he took an early retirement package from AGT/Telus, realizing retirement was not meant for him at that time. He never ever gave up his passion for hard work that was a value instilled upon him from his early years with his father. He continued to build his portfolio after retirement from AGT/Telus with public works on the Kainai Nation, Landscaping, he built contracts with Treaty 7 housing which led to a permanent position within the organization as the director of housing maintenance in the Calgary district 10 years and ended off doing work in Lethbridge, officially retiring from that position.

Bruno loved The Horse Races as for many years you would find him there every Saturday. It was something that was introduced to him from his Weasel Head Family. Bruno owned his own Horses & Cattle; carrying on the family traditions passed down to him. He was very proud when his grandchildren came along. Baby Nolan, Nola, Jude, Giovanni! Jude being a Kiipotaapooka he brought him everywhere. He was so proud of him as they assisted in raising him traditionally along with Kendra!

Bruno attended St. Mary’s Indian Residential School at the age of 7 in 1951 to the age of 20 in 1964. It should be noted that Bruno was a devoted Montreal Canadiens Fan. Very athletic he was involved in playing a variety of sports such as basketball, baseball, track n field, football, etc., along with his cousin Charlie Blood and his uncle Peter Weasel Head. Though he had many experiences throughout Residential School, it was not one of the memories he would talk about. It was then he carried on his education to Lethbridge Community College- Drafting Program & SAIT in Calgary, AB.

He met the love of his life Korine Yellow Horn in 1967. Four years later they married on October 16, 1971 celebrating 52 years together. Bruno & Korine celebrated a personal triumph in 1973 when they became home owners in Lethbridge. Together they created a life which led to the birth of their pride & joys, Jonathan & Kendra. Bruno being a devoted father did everything he could do for his children. He & Korine loved to travel and took Jonathan & Kendra on various journeys all over the world and turtle island. They joined the Iitskinaiksi (Horn Society) as bundle holders for 6 years; living in the tipi were the memorable moments they shared together with family during the Summer, as spiritual leaders and elders.

Bruno is well known for how dedicated and how hard working he was, from a young child into the man he became. He will truly be missed by all who knew him.

A Funeral Service will be held at CORNERSTONE FUNERAL HOME, on Tuesday, January 18, 2022 at 11:00 A.M. with Peter Weasel Moccasin officiating. Due to COVID-19 restrictions, attendance will be limited. Kindly RSVP your attendance to Cornerstone at 403-381-7777 or care@cornerstonefh.ca

The Funeral Service will be livestreamed and may be accessed via Bruno’s obituary on the Cornerstone website.

Following the Funeral Service, Floyd will be laid to rest with his beloved wife Korine, in the Many Bears Family Plot on the Blood Reserve.