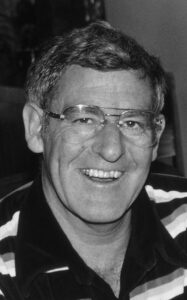 George Meyer of Calgary, AB, beloved husband of the late Patricia (Pat) Meyer, passed away on December 31, 2021 at the age of 92 years.

George was born in Medicine Hat on February 26, 1929 to Henry and Virginia (Jean) Meyer. George started school in Bullshead, a CPR whistle-stop west of Medicine Hat, where they lived in the Station House, and George, sister Doreen, and cousin Dwayne attended the one-room State School. The family moved to Nanton in 1939, where George played hockey, discovered his singing prowess, learned trumpet, received high school matriculation, took an apprenticeship as a printer’s devil at the Nanton News, and completed the National Institute of Newspapers correspondence course. He lost his mother to cancer in 1944. While a linotype operator for the Lethbridge Herald, he continued to visit Nanton, and met the beautiful Patsy Johnson. George married Pat in 1955, in Nanton.

George’s life as an editor and publisher began when he and Dick Hawk bought the Nanton News in 1957. In 1959, George bought an interest in the Camrose Canadian, where he was reporter-editor, as well as editor-manager of the Tofield Mercury, and for a short time the Wetaskiwin Times. He took over as the publisher-editor of the Taber Times in 1966. George and his partner Walter Koyanagi bought the first offset web press to operate south of Calgary, and began printing their own and others’ community newspapers. The Times won numerous awards for photography and news writing under George’s time as editor, and subsequently under protégé Coleen Campbell. George and Pat moved to High River in 1988, to be nearer to family, and George acquired an interest in the High River Times and the Nanton News (subsequently bought by Frank and Emily McTighe), and, with then son-in-law Gordon Scott, the Claresholm Local Press. George was devastated by Gord’s untimely death, and fortunately found in Roxanne Thompson the perfect next publisher.

George was an active member of the Alberta Weekly and the Canadian Community Newspaper Associations (AWNA, CCNA). He held various roles on their boards, and received several awards and honours including the CCNA Gold Quill Award, for 50 years of service to the industry. In 2004, George’s book “A Prairie Publisher” was released. George is remembered by those in the community newspaper business for being ever gregarious, hard-working, and a generous spirit, offering mentorship and support to many.

George supported every community that he lived in, with his talents in music and business, and his time. George served in numerous community positions including chambers of commerce, service clubs, church and hospital boards, and participated in quartets, bands, and choirs. George put his active newspaper role on hold to become the mayor of Taber in 1980, when George and Deputy Mayor Ken Kurio organized the first exchange with Taber’s sister city, Notogawa, Japan. He ran and was elected mayor again in 1986. George was a sports fan, with hockey and baseball at the top of the list — he rarely missed a Taber Golden Suns hockey game. George’s unflagging energy and dedication to the communities in which he lived contributed to him receiving the Governor General’s Commemorative Medal in 1993.

George was devoted to Pat and her family through their 66 years of marriage. He supported Pat’s creative talents and lifelong learning, for example, helping build a pottery studio and outdoor kiln in High River, and keeping Pat company when she attended week-long summer classes at Red Deer College. George had always wanted to attend university, and similar to Pat, fulfilled that ambition in the late 70s at the U of L, taking Political Science, English and Astronomy.

George was kind and welcoming to all he met. They made many lifelong friends in Nanton, Camrose, Taber, High River, Waterton Park, Mission (TX) and Casa Grande (AZ). George enjoyed golf and music wherever they lived. Pat and George’s three daughters grew up in Camrose and Taber, and remember with extra-special fondness falling asleep to George’s barbershop quartet rehearsals. Helping out at the Taber Times gave them an introduction to responsibility as well as a love of paper products. The family’s most fun memories revolve around spending time with family and friends at the cabin in Waterton Park. George enjoyed many evenings listening to the live chamber music at the Prince of Wales hotel. Grandson Evan recalls George always being there for him — playing chess, meeting him “halfway” in Red Deer for Rebels’ hockey games, building model trains, driving the golf cart, and taking train trips. Driving George’s car across Alberta while sitting on a pillow, is a particularly treasured memory.

George is survived by three daughters, Holly of Edmonton, Janet (Rob) of Las Vegas, Virginia (Shawna) of Calgary; one grandson Evan (Kirstyn) of Edmonton; great-grandchildren Elliot and Jenny, and special grand-friends Miranda, Kyla, Brett and Kelly. George was predeceased by his wife Patricia Meyer, his sister and her husband Doreen and Lloyd Nelson, and brothers-in-law Herb (Cathie) Johnson and George (Roberta) Robinson.

A Private Celebration of George’s Life will be held on January 28th at 10:30 a.m. Family and friends are invited to join the service via the livestreaming available on George’s Tribute Page at www.lylereeves.com . Condolences, memories and photos may be shared and viewed on George’s obituary at www.lylereeves.com or directed to Holly, Janet or Virginia. In lieu of flowers, please consider a donation to the Alzheimers Society or the charity of your choice.