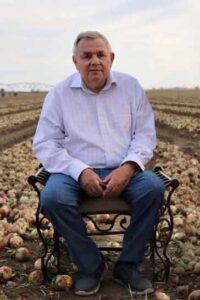 Casey Gouw Sr., beloved husband of Janet Gouw, passed away in Taber on Monday, September 19, 2022 at the age of 81 years.

Casey didn’t want harvest to be interrupted on his account and for this reason, a funeral service will be announced after harvest is finished. A private burial service will be held at the Taber Memorial Garden on Wednesday, September 28, 2022. Condolences may be forwarded by visiting our website at www.southlandfuneral.com

Besides his loving wife Janet, whom he shared his life with for over fifty eight years, he is survived by their four children, Casey

He was also predeceased by Janet’s parents Harry and Janet Taylor and her sister Harriet Elfring.

Casey was born in Barendrecht, Holland on December 26, 1940 to Arie and Bastianje Gouw. Growing up in the Netherlands until he was nine years old, left him with some faint memories of his childhood including living through WW II. He immigrated to Canada with his parents and nine siblings, settling in Magrath in 1951. He remembered his excitement upon arriving in Canada, the vastness of the land, with so much for a young boy to explore. At a young age he already had a love for the land, which continued to grow as he set out in his desire to be a farmer and own his own land.

In 1963, Casey met Janet Mae Taylor and they married on June 26, 1964 in Fort Macleod. Together, they worked side by side raising their family and establishing the business. He had humble beginnings working with his dad and brothers growing sugar beets and grain. He also worked as a hired hand for local farmers and became “farm foreman” on a couple of farms in the Taber area before he set out on his own venture. In 1986, Gouw Quality Onions was established with sons Casey and Kyle. He worked many long hours in the designing of specialized equipment for harvesting onions, not available on the market at the time. Among many of the creations he designed was an onion lifter and onion topper. In July 1998, he was granted a United States patent for his original creation of the onion topper. Another design was an automated green onion line built for Circle Produce in Calexico, Mexico. These achievements speak to Casey’s many innovations as a pioneer in the Onion Industry.

His two greatest passions in life were family and farming and not always in that order. There was never any doubt that he loved them both.

He loved and welcomed all new additions to his family. He was very proud of his four children. His fourteen grandchildren were his pride and joy and he had a special love for his five great grandchildren.

Casey was a man of few words. Determined, stubborn, innovative, resourceful, he would never give up until the problem was solved. He had a work ethic second to none, something that he endeavored to pass on to his kids and grandkids. His long hours working didn’t allow much time for hobbies, but when opportunity arose, he enjoyed fishing.

For the past thirty years he struggled with the pain and immobility of rheumatoid arthritis and multiple other health issues as of result of this chronic disease. He met those challenges with determination, strong will and a ‘never give up’ attitude.

Casey was loved by many and had a positive and lasting impact on those who knew him. May he rest in peace.

The family are sincerely grateful for the compassionate care given by the entire healthcare team at the Taber Health Centre, the Home Care team and the staff at the Coulee Medical Clinic.

One Condolence for “GOUW, Casey Sr.”