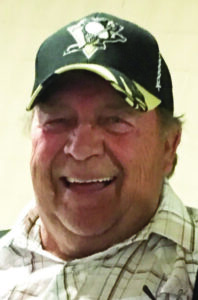 It is with great sadness that the family of the late Butch Egeland announce that he said his last goodbye on Monday, September 19, 2022, surrounded by his family in Calgary at the age of 74 years.

The Burial Service will be held at the Ibbestad Lutheran Cemetery, one kilometre east of Range Road 182 on Township Road 154, northeast of Enchant, on Friday, September 23, 2022 at 11:30 A.M.

The Funeral Service will be held at the Enchant Community Hall, 121 Center Street, Enchant on Friday, September 23, 2022 at 1:00 P.M. Condolences may be forwarded by visiting our website at www.southlandfuneral.com.

Besides his loving wife Wendy, Butch is survived by their four precious daughters Lori (Rob) Doerksen and their family Brandi, Lane and Dakota; Tami (Cody) Plumb and their family Chase and Torynn; Lisa Egeland; Kim (Cody) Dorin and their family Ty and Emersyn. He is  also survived by his siblings Taletta Dorchak, Maggie Egeland, Alma Osberg, Gordon (Carol) Egeland, Gladys Hagen and by his brother-in-law Charlie (Hazel) Woolford. He is adored by his grandpuppies and by many cherished nieces, nephews and friends.

Butch was born in Lethbridge on January 7, 1948 to Oscar and Anna Egeland, the youngest of ten children. He grew up on the original homestead at Circle Hill where he farmed and began ditchriding. He worked for the Bow River Irrigation District and St. Mary River and Taber Irrigation Districts. He drove faster on the ditchbanks than he did on the road. Butch did not like retirement.

His love of sports started from an early age. As a kid, he played ball and skated with the neighbourhood. He played, coached and watched ball and hockey for years and became an even bigger fan when his grandkids started playing sports. Of course, the Calgary Flames was the only team to cheer for if you wanted to be a part of the family, even if you had to be bribed.

His other love was cattle and he enjoyed taking his family on bumpy rides through his cattle herd. This interest led to a second job as a custom processor at feedlots around southern Alberta for more than thirty five years. ‘Going branding’ made many special memories with his girls, sons-in-law and grandkids. He employed and influenced many young people over that period of time.

Hunting was something else Butch liked to do mostly because of the people he was with. This group has a long tradition of spending Thanksgiving together and doing the Hunters Hockey Draft which Butch actually won last year. He was looking forward to everyone being together and bragging about his win.

His biggest love were his four daughters who were all so special to him, they brought home the sons he always wanted and then came the seven grandchildren who were such fun, watching all their activities, even figure skating and playing cards. Oh the fun and giggles he had beating everyone at cards with his uncanny luck. He had a great last weekend with grandkids and playing in a crib tournament with Lori.

“Thank you Butch – dad, gpa, brother, uncle, friend, teammate, coach and boss. We love you.  We miss you. We will continue the legacy you created.”