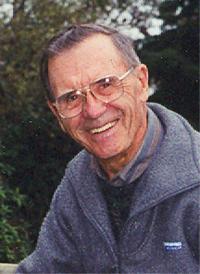 Reinhold Knodel passed away on Thursday, August 30, 2012, at the age of 91 years, beloved husband of Gladys Knodel of Medicine Hat. He also leaves to cherish his memory his children, Keith (Brenda) Knodel), Myles (Carol) Knodel all of Medicine Hat and Terry Knodel of Schuler; one sister-in-law Sophie Knodel of Medicine Hat as well as numerous nieces and nephews. He was predeceased by his parents, Rosina and Jacob Knodel; his granddaughter, Kristin Jane Knodel; three brothers, Otto (Katie), Walter; and his twin Reinhard (Zena); two sisters, Bertha (Reinhold) Maier and Amelia (Paul) Maier; his brothers and sisters-in-law, Alphy (Isabelle) Johnson and Florence (Jack) Walker. Reinhold attended Surprise School. He finished grade 8, which was as far as you could go at that school. Born as one of identical twins, it was a source of humor that the family needed two more children, one to get the wood and one for the water. Being identical it was Reinhold and Reinhard’s own source of humor to assume one another’s identities when people were confused as to who they were talking to. It is said that on more than one occasion they changed clothes with one another at a dance to have fun with their dates. They met many complete strangers who seemed to know them. It was a challenge to see how far a conversation could be taken before the stranger realized the game was up. Reinhold had a mischievous side which would be accompanied by a hearty laugh. From an early age, farming was a prime interest. Reinhold did the normal routine of chores, cleaning barns, milking cows, before he started working with his dad who had a threshing machine. He eventually became the machine boss. During the war he was hired to work on travelling threshing crews in the Halkirk area to harvest wartime crops and often talked about the people he met on that adventure. In the later 40’s and early 50’s he had a larger truck and hauled cattle to sales rings in Lethbridge and Medicine Hat. For one winter he worked for Canadian Freightways driving freight truck. But the farm was his first choice and when his parents retired to Lethbridge he took on the farm operation. On October 23rd, 1952 he married Gladys Johnson, a school teacher at Schuler who caught his eye. He did his courting with a bright red 3/4 ton Chev truck. Students recall Mom arriving one morning after some bad conditions closed many roads riding in the box on the back of a Ford; it needs to be said that the box was nicely padded with straw on a Ford … tractor, that is. It was the only transportation that could make it through the roads. Along with crops a family was also planned and the first boy, Keith was born in 1954 followed by Myles in 1957 and Terry in 1963. Together Dad’s greatest love was his family and his farm. He and Mom were active in community affairs. They participated in the School Council, the Schuler Community Association, he was a director on the Schuler Water Coop. In 1960 he became very active in the local Telephone Coop as the billing agent, the secretary treasurer and the on call repair man. He served on the local Coop Implements board, and the UFA Advisory Committee for many years. Recreationally and socially he and Mom got involved with the Hat Swingers Square Dance Club which led to two trips, one to Bermuda and a cruise to Alaska as well as many weekend dance conventions and demonstrations. In 1989 they bought a house in Medicine Hat, and they enjoyed a few more years of Square Dancing. Dad took up fishing as a past time, sometimes Mom had a rod too, but more often in the winter because summer had too many farm duties. For a few years he played cribbage at the Moose. One passionate activity was the Saturday Wonder Word puzzle. To say that he retired to Medicine Hat is a bit of a stretch, as that never took hold in his mind. Even as his memory was failing, to the last week before he was hospitalized he coaxed a trip to the farm if only to see if the road still was there. Family and friends who wish to pay their respects may do so at the PATTISON FUNERAL HOME on Monday evening, from 7:00 – 9:00 p.m. and on Tuesday from 12:00 – 12:55 p.m. The funeral service will be held in the PATTISON CHAPEL on Tuesday, September 4, 2012 at 1:00 p.m. with Rev. George Brandt officiating. As an expression of sympathy donations may be made to the Kristy Care Fund c/o the Medicine Hat Pregnancy Support, 4 – 554 3rd St. SE, Medicine Hat, AB T1A 0H3 or “HALO” c/o Southern Alberta Medic Air Society, #12 49 Viscount Ave SW, Medicine Hat, AB T1A 5G5. Please make cheques payable to Southern Alberta Medic Air Society or to the Palliative Care Unit c/o Medicine Hat Regional Hospital, 666 5th Street SW, Medicine Hat, AB T1A 4H6. To e-mail an expression of sympathy, please direct it to: pattfh@telusplanet.net subject heading: Reinhold Knodel, or you may visit www.gonebutnotforgotten.ca and leave a message of condolence. Funeral Arrangements are by the PATTISON FUNERAL HOME AND CREMATORIUM 540 South Railway St. SE, Medicine Hat T1A 4C2