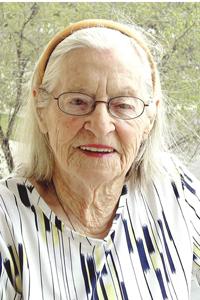 On Friday, August 31st, Lina Flaig, beloved wife of the late Frederick Flaig, passed away at Sunnyside Care Centre. Lina will be lovingly remembered by her daughter, Mary Louise (Bernard) Merrick of Red Deer and their children, Rachelle (Michael) Scrase, Kathleen (Joel) Hill, and David (Jody); and her son, Nat (Lynne) and their children, Heather (Mike) Martin, Thomas (Pam), and Lindsay (Mark) Steiner; seven great-grandchildren, Connor Tiffany, Sarah and Ethan Scrase, Lucas and Lacey Hill, and Katelyn and Ella Merrick; as well as numerous nieces, nephews, and other relatives and friends. Lina was predeceased by her parents, Nat and Hetty Conner; her husband of 60 years, Fred Flaig; two sisters, Kathleen and Eileen, and two brothers-in-law, Jim Pratt and Eric Lloyd. Lina was born in Belfast, Ireland, immigrating to Canada at the age of two years. Lina attended Riverside, Toronto Street, and Alexandra High Schools before attending Calgary Normal School. In the 1930’s and early 1940’s she taught at several rural schools including Snakevale (Schuler), Gros Ventre, Vale, and Tothill as well as Elizabeth Street School in Medicine Hat. At this time, Lina met Fred and they married in 1940. During WWII, Lina was called back to teach in the Tothill District while Fred served with the RCAF in Europe. After the war, they were able to move into Medicine Hat when Lina agreed to carry on Mrs. Cuyler’s Kindergarten. Later, moving to a newly purchased home, Lina established Jack and Jill Kindergarten that she operated for the next 14 years. Returning to Medicine Hat School District No. 76, Lina taught at Crestwood School (the first Grade One teacher) and was teacher-librarian at both Webster Niblock and Alexandra Junior High Schools. Through Summer School and a sabbatical year, Lina earned her Bachelor of Education degree in 1968 (at the age of 58!). Lina belonged to many organizations: Medicine Hat Golf Club, Riverside Book Club (for over 60 years), Past Matron Order of the Eastern Star (Murray Chapter), Business & Professional Women’s Club, Alberta Teachers’ Association, Medicine Hat Library Board, and Ladies’ Bridge Club. Lina also had a life-long involvement at St. John’s Presbyterian Church – singing in the choir, teaching Sunday School, and founding the first Girl Guide movement in Medicine Hat in 1932. She was the first Brown Owl, the first Ranger Captain, and the first Ranger Camp Commandant at Elkwater for which she received excellent reviews from the Girl Guide Provincial Command. Lina was also a member of Thursday Club, and she was one of the first two women elected as an Elder at St. John’s. Through all of her endeavors, her first love was always teaching. Her life-long commitment to early childhood education was recognized in 1992 when the Early Childhood Professional Association of Alberta presented her with the Children’s Service Award. The family would like to thank Sunnyside Care Centre and, in particular, the wonderful staff on the Sunnyview Unit for their care, kindness and compassion. The Memorial Service will be held in ST. JOHN’S PRESBYTERIAN CHURCH, 504 – 2nd Street SE, on Friday, September 7th, 2012 at 2:00 p.m. with Reverend Dr. Nancy Cocks officiating. A Private Interment will take place at Hillside Cemetery. Memorial gifts in Lina’s memory may be made to the St. John’s Presbyterian Church, 504 – 2nd Street SE, Medicine Hat, Alberta, T1A 0C6 or to the charity of one’s choice. Condolences may be sent through www.saamis.com www.gonebutnotforgotten.ca or to condolences@saamis.com subject heading Lina Flaig. Radio funeral announcement can be heard on Thursday around 12:35 p.m. on Power 93.7 fm. Funeral arrangements are entrusted to SAAMIS MEMORIAL FUNERAL CHAPEL AND CREMATORIUM, “The Chapel in the Park”, locally owned and directed. Should you wish any additional information, please telephone 528-2599.

No Condolences for “SARAH CAROLINE FLAIG”