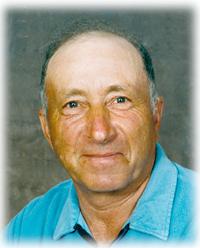 1925 ~ 2012
Wally was born on the farm in Eagle Butte on December 27, 1925, and passed away peacefully with family by his side at the Masterpiece Assisted Living Facility on Friday, September 7, 2012.  Wally was the oldest son of the late Jacob and Edith Kallenberger.  He was predeceased by one sister, Alice Webb and three brothers-in-law, Bill Webb, George Sauer and Bill Campbell.  Wally is survived by one sister, Margaret Campbell;  three brothers, Lance (Marion), Joe (Norma) and Harris as well as numerous nieces and nephews.  A Celebration of Wally’s life will be held at Cook Southland Funeral Chapel, 901 – 13 Street S.W., Medicine Hat on Friday, September 14, 2012, at 10:00 A.M.  (Condolences may be expressed by visiting www.cooksouthland.com)  Honoured to serve the family is Cook Southland Funeral Chapel, 901 – 13th Street S.W.   Medicine Hat, Alberta   T1A 4V4  Phone 403-527-6455

No Condolences for “WALLACE KALLENBERGER”