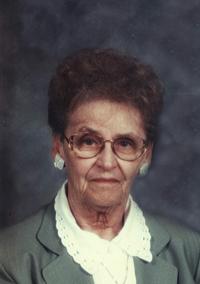 With deep sadness, the family of Mrs. Clara Murschell of Medicine Hat, beloved wife of the late Mr. Max Murschell, announces her passing on Thursday, September 13th, 2012 at the age of 88 years. She leaves to cherish her memory two sons, Dexter (Fern) Murschell of Medicine Hat and Dr. Warren (Elizabeth Watts) Murschell of Vancouver, BC. Also left to mourn her passing are her three grandchildren: Troy (Tammy) Murschell of Medicine Hat, Amy Murschell of Calgary and Gillian Murschell of Vancouver; and her two great-grandsons, Dawson and Nicolas Murschell. She is also survived by her sister, Betty Becker; her sister-in-law, Rosie Scheifele, all of Medicine Hat; and her brother-in-law, Vernon Murschell of Rocky Mountain House; as well as her nieces, nephews, and cousins, and their families. Clara was predeceased by her husband, Max on October 26th, 2002, as well as her parents, John and Bertha Scheifele, and Max’s parents, John and Hilda Murschell. Also predeceasing her are her brother, Otto Scheifele and her brother-in-law, Harold Becker. Clara was born in Medicine Hat on July 3rd, 1924 and was raised and attended school in the Hilda area. She and Max were married on October 17th, 1943, and together they farmed west of Hilda until 1979, when they moved to Medicine Hat, retiring from farming a few years later. Together they enjoyed their retirement. Even though her vision was impaired, Clara enjoyed cooking and baking until her health deteriorated. In 2005, she moved to Chinook Village and continued to enjoy socializing with friends and family, whom she highly valued. She especially loved her grandchildren and great-grandsons, always showing great interest in their activities and achievements. She will be dearly missed but leaves us with many fond memories. Those wishing to pay their respects may do so at SAAMIS MEMORIAL FUNERAL CHAPEL on Wednesday from 7:00 to 9:00 p.m. and on Thursday from 1:00 to 1:55 p.m. The Funeral Service will be held in SAAMIS MEMORIAL FUNERAL CHAPEL, #1 Dunmore Road SE, on Thursday, September 20th, 2012 at 2:00 p.m. with Pastor Julianna Wehrfritz-Hanson officiating. A Private Interment will take place in the Family Plot at Hillside Cemetery. Memorial gifts in Clara’s memory may be made to the Alberta Heart & Stroke Foundation, #124, 430 – 6th Avenue SE, Medicine Hat, Alberta, T1A 2S8. Condolences may be sent through www.saamis.com or www.gonebutnotforgotten.ca or to condolences@saamis.com subject heading Clara Murschell. Radio funeral announcement can be heard on Wednesday around 12:35 p.m. on Power 93.7 fm. Funeral arrangements are entrusted to SAAMIS MEMORIAL FUNERAL CHAPEL AND CREMATORIUM, “The Chapel in the Park”, locally owned and directed. Should you wish any additional information, please telephone (403)528-2599