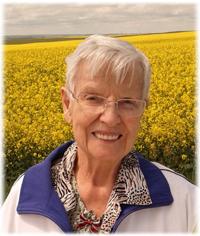 Mrs. Florence Schafer, beloved wife of the late Nick Schafer, passed away peacefully with family by her side at the Medicine Hat Regional Hospital on Saturday, September 29, 2012, at the age of 98 years.  Florence was born on July 23, 1914, oldest daughter to Robert &?Flora Dickieson.  Her roots were planted in a farming community at Findlater, SK.  She attended the one room rural school there as a child and in 1935 after attending normal school returned as a young teacher, teaching Grades 1-11, of whom three were her own siblings.  A dedicated teacher she was, often staying after school or on Saturdays helping her students.  She later accepted teaching positions at Fairlight, Qu’appelle Valley, Brancepeth, and finally south of the Cypress Hills at Senate, SK. ?It was here that she met her cowboy “Nick” who later became her husband and companion for 45 years.  Always with a zest for life, and restless to go where the action was, Florence enlisted in the Canadian Women’s Army Corp. December 20, 1943 serving overseas during WWII in the payroll division, being discharged on May 30, 1946.  Florence and Nick spent many happy but hard-working years in Southwestern Saskatchewan farming, making a home and raising their four children, who’s lives she played an active role in.  During the 1960’s, once all their children were in school, she once again got to use her teacher voice at Consul School.  After retiring to Maple Creek from farm life, Florence and Nick enjoyed many holidays to Arizona, Alaska, Vancouver, Europe and on her own at the ripe age of 92 enjoyed a trip to Scotland with her college buddies – young and old.  Throughout her long life, Florence was active serving in executive positions with the United Church – Elder, pianist, Secretary- Treasurer, Maple Creek Agricultural Society, Maple Creek Horticultural Society, Saskatchewan Retired Teachers Association, Southwest Community Club and the Legion.  Having an eye for flare and fashion, at the age of 80 years, she became a model for D’Allards.  Florence was a perfect homemaker – loved to sew, cook, can, knit, garden and doing crafts such as paper toll.  She was a wise lady who freely offered her advice.  At the age of 90 years, the oldest student at the Medicine Hat College, she decided to take a computer course – thus continuing with her life-long commitment to “learning and education”.  Until a couple of years ago, Florence pretty much remained independent.  Failing health forced her to give up her independence and move into Masterpiece Retirement residence.  Florence leaves to cherish her memory, Diane (John) Schmitt, Richard (Krista) Cole & Kayla, Thelma (George) Dirk, Bryce (Brianne), Adrian (Meghan) Karson & (Makena), Sean (Erica), Earl (Delvina) Schafer, Melissa (Jesse) Waylon & Harper, Dennis (Ula) & Oskar, Shana (Chad), Andrea (Morgan) Judge, Stefan & Alexis, as well as numerous nieces, nephews, friends and neighbors.  Florence was predeceased by her husband Nick, siblings, Gordon, Ralph, Daisy & Oriole along with many wonderful friends.  At last Florence will return to Saskatchewan.  Family and friends are invited for a time of visitation at Cook Southland Funeral Chapel, 901 – 13 Street S.W., Medicine Hat on Tuesday, October 2, 2012 from 7:00 P.M. to 8:00 P.M.  A celebration of Florence’s life will be held at the Consul Community Hall, Consul, SK., on Wednesday, October 3, 2012 at 2:00 P.M., where she will be laid to rest with her beloved Nick.  (Condolences may be expressed by visiting www.cooksouthland.com)  If friends so desire, memorial tributes in memory of Florence may be made directly to the Southwest Integrated Healthcare Facility, Maple Creek Hospital, P.O. Box 1330, Maple Creek, SK., S0N 1N0 or to the Children’s Wish Foundation, P.O. Box 1148, Medicine Hat, AB.,  T1A 7H3.  Honoured to serve the family is Cook Southland Funeral Chapel, 901 – 13th Street S.W.   Medicine Hat, Alberta   T1A 4V4  Phone 403-527-6455

No Condolences for “FLORENCE SCHAFER”