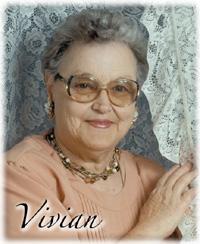 1926 ~ 2012
Mrs. Vivian Pauline Montean, beloved wife of the late Mr. John Montean, passed away at the Medicine Hat Regional Hospital on Sunday, September 30, 2012, at the age of 86 years. She was born Vivian Armstrong on June 12, 1926 in Macoun, Saskatchewan to proud parents, Gordon and Martha Armstrong. She received her schooling in Macoun and later became an LPN. Vivian met her future husband, John and they were later married and blessed with five children. They raised their family in Lafleche, Medicine Hat and settled in taber. For many years she committed
her life to family and raising her children. she loved music, shopping and visiting with her friends and family. Vivian had a wonderful sense of humor and you could always count on her to have an amusing comeback. A few years ago when she was still able, she volunteered for many service groups. For the past four years, Vivian resided at Sunnyside Nursing Home and enjoyed her time there. Her memory will be cherished by her daughter-in-law, Marcia Montean of Medicine Hat; daughter, Bobbi Montean of Thompson, Manitoba and
three sons, Bill, Ray and Gordon Montean all of Edmonton; grandchildren, Cory Montean, Karri Montean and Nicole Yaworsky all of Medicine Hat and Tyrone and Alicia of Carrot River, Saskatchewan. She is also survived by two sisters, Alice of Edmonton and Betty of Calgary as well as a brother, Bill of Ottawa. She was predeceased by her husband John in 1990; parents, Gordon and Martha Armstrong; a son, Ron and a daughter, Susan. Vivian’s life will be honoured with a private family gathering at a later date. (Condolences may be expressed by visiting www.cooksouthland.com) Honoured to serve the family is Cook Southland Funeral Chapel, 901 – 13th Street S.W.   Medicine Hat, Alberta   T1A 4V4  Phone 403-527-6455