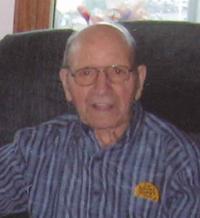 Mr. Jack Gebhardt passed away on October 5th, 2012 at the age of 95.  He was beloved husband of his late wife of 66 years, Edith Gebhardt. Jack leaves to cherish his memory two sons, Ronald (Pat) Gebhardt and Vernon (Dolly) Gebhardt; one daughter, Marlene (Kenneth) Ingenthron, all of Medicine Hat; eight grandchildren; twelve great grandchildren; one sister-in-law, Joyce Sletvold; as well as numerous nieces and nephews. Jack was born in Medicine Hat on September 11th, 1917. He and Edith were married on June 20th, 1939, spending many years in Medicine Hat. Dad was a Plasterer for many years and in the 1950’s owned and operated the Bow Island Auto Service. He eventually moved back to Medicine Hat and once again started his business plastering and stuccoing. He then decided to try the hotel business and bought the Sibbald Hotel. After several years of the hotel business, they moved to Calgary where he once again got into the construction business. In 1975 they returned to Medicine Hat and Dad started another new venture, Gebhardt Exteriors which he continued until the age of 70. Upon retirement he liked to keep busy and enjoyed camping, curling, playing darts, riding his bike, and working in his garden and yard which always were immaculate. Mom and Dad enjoyed having company and playing cards. Guests were always welcome in their home. When Mom became ill, Dad sold his house and later bought his condo at the Wellington where he managed to stay until he was 94. At the time of his passing, Dad was a resident at South Country Village. Those wishing to pay their respects may do so at SAAMIS MEMORIAL FUNERAL CHAPEL, #1 Dunmore Road SE, on Tuesday, October 9th, 2012 from 7:00 until 9:00 p.m. The Funeral Service will be held in SAAMIS MEMORIAL FUNERAL CHAPEL, on Wednesday, October 10th, 2012 at 1:30 p.m. with Gary W. Goran officiating. Interment will follow in the Family Plot at Hillside Cemetery. Memorial gifts in Jack’s memory may be made to the Alzheimer Society (Palliser Region), 401D – 3rd Street SE, Medicine Hat, Alberta, T1A 0G8. Condolences may be sent through www.saamis.com or www.gonebutnotforgotten.ca or to condolences@saamis.com subject heading Jack Gebhardt. Radio funeral announcement can be heard on Tuesday around 12:35 p.m. on Power 93.7 fm. Funeral arrangements are entrusted to SAAMIS MEMORIAL FUNERAL CHAPEL AND CREMATORIUM, “The Chapel in the Park”, locally owned and directed. Should you wish any additional information, please telephone (403)528-2599