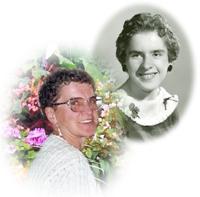 It is with heavy hearts that the family of Annie Morrice, beloved wife of 53 years to George A. (Sandy) Morrice, announce her passing at the Medicine Hat Regional Hospital on Wednesday, October 3, 2012, at the age of 72 years.  Along with Sandy, Annie leaves to cherish her memory:  two sons, Kenneth Hugh Morrice of Calgary, AB. and Michael Steven (Bonnie) Morrice and their children:  daughter, Stevie and son, Reid of Doha, Qatar;  brother, Edward (Diane) Bockman of Abbotsford, B.C. as well as numerous nieces and nephews throughout Canada and the Unites States.  She was predeceased by an infant son, John Joseph in 1966;  siblings, Stan Bockman, Paul Bockman, Chester (Mary) Bockman, Clara (Steve) Bazant, Helen (Joe) Bazant, Frances (Al) Browne, Bill (Adeline) Bockman, Tony (Jean) Bockman, Sophie (John) Burnat, Frank (Alice Marie) Bockman and Joe (Irene) Bockman.  Annie Genevieve Morrice was born in Ranchville, AB. on November 14, 1939 to John and Julia Bockman.  She worked for many years at the Dominion Glass Factory as well as in various food outlets.   Annie was a long-time member of St. John Ambulance, the C.W.L. at St. Patrick’s Church, St. Patrick’s Quilting Club, the Veiner Centre and the Redcliff Senior’s Centre.  She worked with Sandy for many years with the Junior “B” Cubs Hockey Club and was a long-time fan of the Medicine Hat Tigers where she and Sandy travelled along with the team (her jersey had the name “PEG?LEGS?WIFE – 65” on the back).  Annie was an active member of the Medicine Hat Lawn Bowling Club since 1962, having won a Gold Medal at the World Masters Games in Edmonton in 2005 and a Bronze Medal in Australia in 2009.  Those wishing to pay their respects may do so starting one hour prior to Vigil Prayers and one hour prior to the Funeral Mass.  Vigil Prayers will be recited at Cook Southland Funeral Chapel, 901 – 13 Street S.W., Medicine Hat on Tuesday, October 9, 2012, at 7:00 P.M.  The Funeral Mass will be celebrated at St. Patrick’s Catholic Church, 238 – 2 Avenue N.E., Medicine Hat on Wednesday, October 10, 2012, at 10:30 A.M. with the Very Reverend Father Long Vu celebrant.  Interment will follow at Hillside Cemetery.  (Condolences may be expressed by visiting www.cooksouthland.com)  If friends so desire, memorial tributes may be made to the Heart and Stroke Foundation of Alberta, 124, 430 – 6 Avenue S.E., Medicine Hat, Alberta, T1A 2S8, or to the charity of one’s choice.   Honoured to serve the family is Cook Southland Funeral Chapel, 901 – 13th Street S.W.   Medicine Hat, Alberta   T1A 4V4  Phone 403-527-6455

No Condolences for “ANNIE GENEVIEVE MORRICE”

Leave a Condolence for Dar Dallard