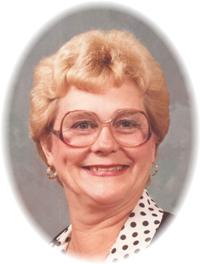 Mrs. Eleanor “Peggy” Neubauer of Medicine Hat, beloved wife of the late Mr. Emil Neubauer, passed away on Thursday, October 11th, 2012 at the age of 84 years. Peggy leaves to cherish her memory two sons, George Neubauer of Brooks, and Doug (Gayle) Neubauer of Mankota SK; four grandchildren, Kelly (Leisa) Matheson and their children, Alexa and Caleb; T.J. (Jolene) Matheson and their son, Maddyn; Lee Matheson and Taylor Matheson; one nephew, Bill Waite; as well as Emil’s nieces and nephews. Besides her husband, Emil; Peggy was predeceased by her parents, George and Myrtle MacKinlay; and one sister, Georgina “Dewey” Waite. Peggy was born in Kelvington, Saskatchewan on June 9th, 1928. It was here that she was raised and educated. She obtained her teaching training in Saskatoon. After graduation Peggy began her teaching career in the Irvine area where she met and married Emil. They made their home on Emil’s farm where they raised their two sons. Her teaching career was shortly interrupted with the arrival of her boys. However, Peggy resumed teaching after the boys started school. For many years she taught in Irvine but relocated to Elkwater Hutterite Colony School, becoming its first teacher. It was only fitting that Peggy began her teaching career in a one room school and that it should conclude in a one room school. In the early 1980’s they retired to Medicine Hat. However, Peggy began her own business, Zany Zebra Fabrics which she operated for many years. Peggy loved teaching, sewing, gardening and visiting relatives and especially the success of her children. The funeral service will be held in the SAAMIS MEMORIAL FUNERAL CHAPEL, #1 Dunmore Road SE, on Tuesday, October 16th, 2012 at 1:30 p.m. with Gary W. Goran officiating. Memorial gifts in Peggy’s memory may be made to Alzheimer Society (Palliser Region), 401D – 3rd Street SE, Medicine Hat, AB, T1A 0G8. Condolences may be sent through www.saamis.com or www.gonebutnotforgotten.ca or to condolences@saamis.com subject heading Eleanor “Peggy” Neubauer. Funeral arrangements are entrusted to SAAMIS MEMORIAL FUNERAL CHAPEL AND CREMATORIUM, “The Chapel in the Park”, locally owned and directed. Should you wish any additional information, please telephone (403)528-2599