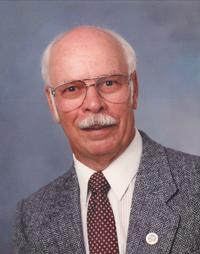 It is with deep sadness that we announce the death of Gordon “Buzz” Osgood on Tuesday, October 16th, 2012 at the age of 89. Buzz was a man of uncompromising integrity, strong family values, who cherished time with family, especially his devoted grandchildren. Buzz was born and raised in Redcliff and lived there until moving to Chinook Village in 2003. In 1939, he left school to support his family and went to work at Dominion Glass in Redcliff, beginning a career with the company that would span 46 years. At the outbreak of WWII he enlisted in the Canadian Army and in January, 1943 was shipped overseas to join the 1st Canadian Division. He was assigned to the Royal Canadian Electrical and Mechanical Engineers (RCEME). He stayed with the RCEME until the end of the war at which time he returned to Redcliff and Dominion Glass. It was there that he met the love of his life, Muriel Hitchen when they were working together in the same office. They were married in 1953 and started and raised their family in Redcliff. Buzz loved the outdoors, in particular hunting and fishing. He found true peace in his favorite hobby and passion–fly fishing. He also enjoyed travelling, in particular his trips to the Netherlands in 1995, 2000 and 2005 with his sons as part of the “Thank You Canada” celebrations sponsored by the Dutch Government. He was predeceased by his wife, Muriel “Murt” in 1990 and daughter-in-law, Kim in 2009. He is survived by two sons, Glenn (Janice) and Dean; four grandchildren, Geoffrey, Julie, Jacqueline (Bo) and Audra, all of Calgary. He is also survived by two sisters, Norma Sharpe of Edmonton and Velma Pancoast of Medicine Hat; two brothers, Howard Osgood of Medicine Hat and Kaye Osgood of Redcliff; as well as numerous nieces and nephews. Those wishing to pay their respects may do so at SAAMIS MEMORIAL FUNERAL CHAPEL, #1 Dunmore Road SE, on Sunday, October 21st, 2012 from 1:00 until 4:00 p.m. The Funeral Service will be held in GORDON MEMORIAL UNITED CHURCH, 401 – 2nd Street SE, on Monday, October 22nd, 2012 at 1:00 p.m. with Reverend Blaine Schaufele officiating. The officers and members of the Royal Canadian Legion, Redcliff Branch #6 will conduct a Poppy Service for their departed comrade. Interment will follow in the Family Plot at Redcliff Cemetery. In lieu of flowers, memorial gifts in Buzz’s memory may be made to the Canadian Cancer Society, 102 – 1865 Dunmore Road SE, Medicine Hat, Alberta, T1A 1Z8 or to the Canadian Diabetes Association, Medicine Hat & District Branch, 102, 73 – 7th Street SE, Medicine Hat, Alberta, T1A 1J2. Condolences may be sent through www.saamis.com or www.gonebutnotforgotten.ca or to condolences@saamis.com subject heading Buzz Osgood. Radio funeral announcement can be heard on Monday around 12:35 p.m. on Power 93.7 fm. Funeral arrangements are entrusted to SAAMIS MEMORIAL FUNERAL CHAPEL AND CREMATORIUM, “The Chapel in the Park”, locally owned and directed. Should you wish any additional information, please telephone (403)528-2599