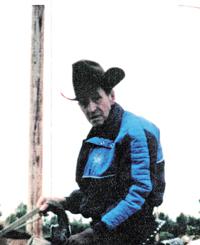 It is with heavy hearts that we announce that Victor Wolfer, 86, passed away Saturday, October 13th, 2012 following a lengthy illness.
He will be sadly missed by his wife Pat (Pansy), his son Leo and his wife Nancy, their children Stephanie, Clayton, and Steven (Katy). His daughter, Kathi and her husband, Butch Van, their children Dean (Tanya) and Jamie-Lyn; as well as 10 and a half great grandchildren and two great great-grandchildren.
Dad was born on December 2nd, 1925 in Burstall, Saskatchewan and was raised in the Burstall area as well as the Medicine Hat area. He was the youngest child of Mathias and Elisabeth Wolfer. He was predeceased by his 10 siblings, John, Herb, Tillie May, Bertha, Anderson, Milton, Melvin, Irene Elhart, Alfred, Harold and Regina.
In his early years, he helped out on the family farms and at the age of 17 enlisted with the Canadian Army to serve his country. While serving with the Canadian Army, Dad saw front line action and was one of many Canadian soldiers who liberated Holland. After the war and a whirlwind courtship, he married Mom in Calgary. Dad and Mom moved to Medicine Hat when Leo was very little and Kathi was on her way. Dad had gained employment with Maple Leaf Mills shortly after arriving back in the Hat and stayed with that Company until the Mill closed. During this time he was a chief shop steward for UFCW and was a negotiation committee member that had to be reckoned with. He finally retired in 1992 working for P&H, the takeover company for Maple Milling.
Dad’s greatest passions were visiting the old west towns throughout Canada and especially the United States, riding horses, giving solid unsolicited and solicited advice to anyone whether it was concerning union, politics, or ranching. He was also a teaser and a jokester. You had to be on your toes to figure out if he meant what he was saying or just joking. After retirement he trained many horses for his grandson Dean and was still riding at the age of 78. His life was as the Frank Sinatra song goes – He Did It His Way.
A celebration of life will be held at the Royal Canadian Legion, 702 – 2nd Street SE, on Saturday, October 20th, 2012 from 11:30 a.m. until 2:00 p.m.; where many great times were spent with family and close friends. Memorial gifts in Victor’s memory may be made to the Canadian Cancer Society, 102 – 1865 Dunmore Road SE, Medicine Hat, Alberta, T1A 1Z8. Condolences may be sent through www.saamis.com or www.gonebutnotforgotten.ca or to condolences@saamis.com subject heading Victor Wolfer. Radio funeral announcement can be heard today around 12:35 p.m. on Power 93.7 fm. Funeral arrangements are entrusted to SAAMIS MEMORIAL FUNERAL CHAPEL AND CREMATORIUM, “The Chapel in the Park”, locally owned and directed. Should you wish any additional information, please telephone (403)528-2599