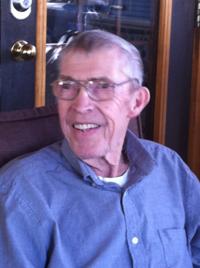 The family of James Dollimont, beloved husband of Ann, announce his peaceful passing at home, fulfilling his last request, surrounded by his loving family on Wednesday, October 17th, 2012. Along with Ann left to cherish his memory are his 9 children, Melita (Frank), Dan (Janet), Sharon (Ivan), Tony (Janice), Jean (Greg), Debbie (Greg), Pam (Mike), Jim (Colleen) and Rod (Bev); his 14 grandchildren, Tracy (Tyson), Sara (Nick), Cindy, Murina (Justin), Danny (Tamara), Clarke, Anthony (Tamika), Mandy (Lee), James (Erin), Michael, Bailey, Spencer, Kennedy and Gracie; and 8 great grandchildren. Also cherishing his memory are numerous nieces and nephews; brothers and sisters-in-law in Newfoundland; as well as Rick and Betty McDonald who reside in Medicine Hat. He was predeceased by his parents, John and Ann Dollimont; 8 brothers and sisters, Alphonse, Pius, Leonard, Owen, Vincent, Matilda, Mary and Alice; and his in-laws, Michael and Mary Jane McDonald. Jim was born on July 21st, 1933 in St. Joseph’s Cove, Newfoundland and in December 2001, Jim and Ann moved to Medicine Hat to the delight of all their family. Jim was a carpenter and loved to work with his hands and tinker in his garage. After moving to Medicine Hat he loved to help his sons in their various renovation projects and he enjoyed a cold beer and storytelling on the weekends. Jim put his family in front of himself-their needs always came first. Jim and Ann would have celebrated their 58th Wedding Anniversary on October 27th, 2012. We as his family and friends are all better people for having him as an influence in our lives. Those wishing to pay their respects may do so at SAAMIS MEMORIAL FUNERAL CHAPEL, #1 Dunmore Road SE, on Sunday, October 21st, 2012 from 6:00 until 9:00 p.m. Vigil Rites (prayers) will be said at SAAMIS MEMORIAL FUNERAL CHAPEL, on Sunday, October 21st, 2012 at 7:00 p.m. The Funeral Mass will be celebrated in ST. PATRICK’S ROMAN CATHOLIC CHURCH, 238 – 2nd Avenue NE, on Monday, October 22nd, 2012 at 11:00 a.m. with Father Long Vu, celebrant. Interment will follow in the Roman Catholic Section at Hillside Cemetery. Memorial gifts in Jim’s memory may be made to the Canadian Cancer Society, 102 – 1865 Dunmore Road SE, Medicine Hat, Alberta, T1A 1Z8, or to the Kidney Foundation of Canada, Bay 1, 3326 – 15th Avenue SW, Medicine Hat, Alberta, T1A 8M4, or to Lupus Society of Alberta, Suite 202, 1055 – 20th Avenue NW, Calgary, Alberta, T2M 1E7. Condolences may be sent through www.saamis.com or www.gonebutnotforgotten.ca or to condolences@saamis.com subject heading Jim Dollimont. Radio funeral announcement can be heard on Friday around 12:35 p.m. on Power 93.7 fm. Funeral arrangements are entrusted to SAAMIS MEMORIAL FUNERAL CHAPEL AND CREMATORIUM, “The Chapel in the Park”, locally owned and directed. Should you wish any additional information, please telephone (403)528-2599