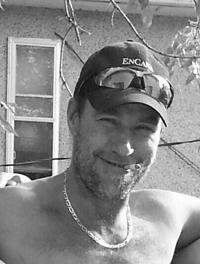 Aaron Eremenko, beloved son, father, brother, cousin, nephew and friend, died suddenly last week at the age of 44. While he joins loved ones who have gone before him, his grandparents, Matt and Rene Eremenko and Jean Schuh, his passing leaves a hole in the lives of those left behind: his daughters, Kaylin and Rayana and his son, Mathew; his mother, Karon (Brian); his father, Nick; his brothers, Scott (Sandy) and Darren (Simone); his aunt, Arlene and cousins, Rhonda and Rennay (Bryce); and his uncle, Brian (Linda). Aaron battled demons throughout his life but was finally in a good place. He had a job he liked in the oil patch, he had found a dear friend in Michelle Slobodin and he was happy. That makes his unexpected passing even more tragic. Aaron was taken from us much too young and he will be deeply missed. Gone but not forgotten, Aaron. Never forgotten. Please join Aaron’s family and friends to celebrate his life at the Redcliff Legion, 302 Broadway Avenue East, on Saturday, October 27th, 2012 at 7:00 p.m. Memorial gifts in Aaron’s memory may be made to the SPCA, 55 Southwest Drive SW, Medicine Hat, Alberta, T1A 8E8. Condolences may be sent through www.saamis.com or www.gonebutnotforgotten.ca or to condolences@saamis.com subject heading Aaron Eremenko. Funeral arrangements are entrusted to SAAMIS MEMORIAL FUNERAL CHAPEL AND CREMATORIUM, “The Chapel in the Park”, locally owned and directed. Should you wish any additional information, please telephone (403)528-2599