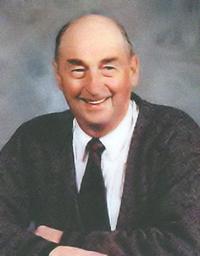 Raymond “Ray” Burns of Medicine Hat passed away on Tuesday, October 23, 2012, at the age of 83 years, beloved husband of the late Rhoda Burns. He leaves to cherish his memory his children, Gary (June) Burns, Randy (Sharon) Burns, Sandra (Barry) Brookes and their mother, Yvonne Newman; Rhoda’s children, Robert (Kim) Will, Gerry Degenhardt, Kathaye (Darrell) Cusack, Elaine Jones and Cindy (Joe) Hopfauf; eighteen grandchildren, twenty one great grandchildren; one sister, Beryl Judd, numerous nieces and nephews and dear friend Gladys Kangas. He was predeceased by his parents Ethel and Frank Burns; one son Murray in 1970, one daughter Tracy in infancy, and son-in-law Mike Degenhardt. Dad was born in Regina on February 19, 1929. In 1933 the family moved to Climax, Saskatchewan and in 1941 moved to Medicine Hat. Dad graduated from Alexander High School in 1947 and in 1948 started his 40 year career with the CPR. In 1951, he married Yvonne Welling and they raised their family in Medicine Hat. Although divorcing in 1963, Dad and Yvonne remained good friends. Dad met Rhoda and they were married on September 3, 1971 and had a very happy life together until Rhoda passed away in 1993. Golfing, curling, doing crossword puzzles and watching the old movies on TCM were some of his favorite pasttimes. Traveling was a passion as well and he went on numerous trips in Canada and abroad. Over the years he shared many great times with good friends Frank and Betty Hagemeister. He always looked forward to the weekly get-together at the CPR Pensioners Club. In recent years, Dad enjoyed spending time with Gladys in Mesa and at her place in Dutch Creek, B.C. The funeral service will be held in the PATTISON CHAPEL on Saturday, October 27, 2012 at 1:00 p.m. with Rev. Barrett Scheske officiating. Interment will follow in the Hillside Cemetery. As an expression of sympathy donations may be made to theHeart and Stroke Foundation of Alberta, NWT and Nunavut #124 – 430 6th Ave. SE, Medicine Hat, AB T1A 2S8. To e-mail an expression of sympathy, please direct it to: pattfh@telusplanet.net subject heading: Ray Burns or or you may visit www.gonebutnotforgotten.ca and leave a message of condolence. Funeral Arrangements are by the PATTISON FUNERAL HOME AND CREMATORIUM 540 South Railway St. SE, Medicine Hat T1A 4C2

No Condolences for “BURNS”