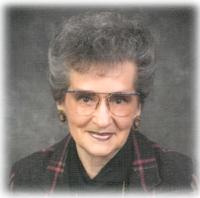 It is with great sadness that we announce the passing of Edith, a dear sister, aunt and friend.  Edith was predeceased by her parents, Christian and Magdalena;  one sister, Mary and one brother, Edward.  She is survived by two brothers, George (Iva) and Leonard (Josephine) as well as one sister, Delores (Gordon) Goebel and their families.  Also left to mourn her passing is her best friend, Tom Rud and his family.  Edith was born on the family farm south of Richmound, SK. and attended school at Haverhill and Richmound.  She loved to play baseball in her younger years and enjoyed watching baseball and hockey throughout her lifetime.  After high school, Edith worked as a teacher’s aide at a rural school near Golden Prairie and in 1952, moved to Maple Creek to work at the front desk of the Commercial Hotel.  One year later, she moved to Saskatoon to embark on an eight month hairdressing course.  After graduation, she moved to Medicine Hat and started a 42 year career at the Hill Beauty shop, working for Paul and Joyce Vermette, Shirley Schneider and Bonnie Hartung.  Edith was always exceedingly “well turned out”, even at 5:30 in the morning with her hair and make-up done, jewellery on and nails polished.  For the last 25 years, Edith has had Tom by her side;  best friends until her passing.  She spent many wonderful hours with Tom and his family at the Elkwater cabin.  Fishing and watching the deer and squirrels were regular pastimes.  Her faith was always very important to her and she was active in both Christ the King and St. Pat’s Parishes.  Edith faced her death with the same independence and strength that she showed throughout her life.  She will be missed by many.  Vigil Prayers will be recited at Cook Southland Funeral Chapel, 901 – 13 Street S.W., Medicine Hat on Monday, October 29, 2012, at 7:00 P.M.  The Funeral Mass will be celebrated at St. Patrick’s Catholic Church, 238 – 2 Avenue N.E., Medicine Hat on Tuesday, October 30, 2012, at 10:30 A.M. with the Very Reverend Father Long Vu celebrant.  Private interment will take place at Hillside Cemetery.  (Condolences may be expressed by visiting www.cooksouthland.com)  If friends so desire, memorial gifts in memory of Edith may be made directly to the Margery E. Yuill Cancer Centre, 666 – 5 Street S.W., Medicine Hat, Alberta, T1A 4H6.  Honoured to serve the family is COOK SOUTHLAND Funeral Chapel, 901 – 13 Street S.W., Medicine Hat, Alberta, T1A 4V4.  Telephone:  403-527-6455.

No Condolences for “EDITH CAROLINE DIETRICH”