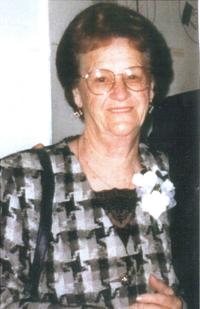 Mrs. Veronica Meier of Medicine Hat, beloved wife of the late Mr. Joseph Meier, passed away on Saturday, October 27th, 2012 at the age of 90 years. Veronica leaves to cherish her memory her son, Charles Meier and two daughters, Irene Brannan and Shirley (Brian) Hoffner, all of Medicine Hat; eight grandchildren; nine great-grandchildren; seven great-great-grandchildren; as well as numerous nieces and nephews. Besides her husband Joseph, Veronica was predeceased by one daughter, Josephine Helm; her parents, Karl and Odilia Hartman; three brothers; and one sister. Veronica was born and raised in Prelate, Saskatchewan and in her later years moved to Medicine Hat. She loved cooking for her family, canning, gardening and flowers. Veronica also loved playing bingo with her family and especially enjoyed her time spent with her grandchildren. Christmas and other family get-togethers were also some of her most treasured times. She will be greatly missed and lovingly remembered by her family and friends. Those wishing to pay their respects may do so at SAAMIS MEMORIAL FUNERAL CHAPEL, #1 Dunmore Road SE, on Tuesday from 6:00 to 9:00 p.m. and at ST. PATRICK’S ROMAN CATHOLIC CHURCH, 238 – 2nd Avenue NE, on Wednesday from 12:30 to 1:25 p.m. Vigil Rites (prayers) will be said at SAAMIS MEMORIAL FUNERAL CHAPEL on Tuesday, October 30th, 2012 at 7:00 p.m. The Funeral Mass will be celebrated in ST. PATRICK’S ROMAN CATHOLIC CHURCH on Wednesday, October 31st, 2012 at 1:30 p.m. with Father Long Vu, celebrant. Interment will follow in the Family Plot at Hillside Cemetery. Memorial gifts in Veronica’s memory may be made to the Canadian Diabetes Association, #102, 73 – 7th Street SE, Medicine Hat, Alberta, T1A 1J2. Condolences may be sent through www.saamis.com or www.gonebutnotforgotten.ca or to condolences@saamis.com subject heading Veronica Meier. Funeral arrangements are entrusted to SAAMIS MEMORIAL FUNERAL CHAPEL AND CREMATORIUM, “The Chapel in the Park”, locally owned and directed. Should you wish any additional information, please telephone (403)528-2599