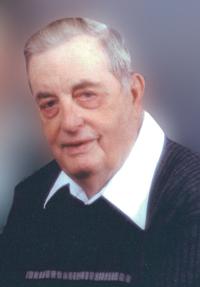 Elmer Ivan Shaw, passed away on Monday, November 5, 2012, at the age of 84 years, beloved husband of Margaret Shaw of Medicine Hat. He also leaves to cherish his memory one son, Donald (Debbie) Shaw of Medicine Hat; two grandchildren, Trent and Dylan Shaw; one sister-in-law, Doreen Shaw, three nephews and one niece. He was predeceased by his parents, Earl and Louise Shaw; one son, David on November 18, 2009 and two brothers, Mervin and Lorne. Elmer was born and raised on a farm in Candiac, Saskatchewan. After graduating from High School in Wolseley he started working as a truck driver which brought him to Alberta where he then chose to stay. Elmer married Margaret Lerner in Medicine Hat on April 27, 1957. He worked as a truck driver for CP Express for 32 years and later worked part time as a driving instructor for the AMA for 18 years. Elmer loved to watch and play all kinds of sports, he started playing baseball as a teenager in Wolseley for the Junior Team. When he moved to Medicine Hat in 1956, he played the position of pitcher for the Medicine Hat Hot Shots, which he was very proud of. After playing baseball for many years he umpired the game as well as participated in bowling, curling, and golf. In his retirement years he enjoyed his time on the golf course at Connaught and was a Life Member. He was also a member of the Foresters, the Royal Canadian Legion, the Knights of Columbus, and the Veiner Center. He loved to watch sports on TV and do crossword puzzles or read western novels. Elmer will be remembered for his patience and quietness, never raising his voice. He took pride in his accomplishments and always took the time to listen or tell a joke. Family and friends will gather for prayers in the PATTISON CHAPEL on Thursday at 7:00 p.m. The funeral mass will be celebrated in St. Patrick’s Roman Catholic Church (238 2nd Ave N.E.) on Friday, November 9, 2012 at 10:30 a.m. with the Very Reverend Fr. Long Vu celebrant. Interment will follow in the Hillside Cemetery. As an expression of sympathy donations may be made to the Parkinson Society of Southern Alberta, #101, 928 Allowance Ave SE, Medicine Hat, AB T1A 3G7 or to the charity of ones choice. To e-mail an expression of sympathy, please direct it to: pattfh@telusplanet.net subject heading: Elmer Shaw or you may visit www.gonebutnotforgotten.ca and leave a message of condolence. Funeral Arrangements are by the PATTISON FUNERAL HOME AND CREMATORIUM 540 South Railway St. SE, Medicine Hat T1A 4C2

No Condolences for “SHAW”