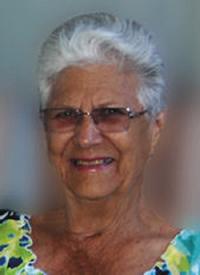 1931 – 2012
Esther Lena Reimer, beloved wife of John Reimer of Medicine Hat, Alberta, passed away surrounded by the love of her family on Thursday, November 8, 2012 at the age of 81 years. Left to cherish her memory, her sister, Hilda Spenst of (Chilliwack, B.C.), her five children, Faye (Mac) Shaw, Ron (Karen) Reimer, Janet (Harold) Schwandt, Kathy (Tom) Pahl, and Mel (Shari) Reimer; her grandchildren, LaDawne (Mike) Boehlig, Carla-Jo Shaw (Dwayne Deschamps), Jeremy Shaw, Mike Reimer, Ryan (Sara) Reimer, Kerrie Schwandt, Jackie (Jamie) Taylor, Tyrel (Heather) Pahl, Chance (Vanessa) Pahl, Dayton, Austin and Paige Remier. Also left to cherish her memory, her great-grandchildren, Justin Shaw and Braden Deschamps, Taylor and Kamryn Reimer, R.J. and Tuff Reimer, Donovan Taylor, Hally and Evyn Pahl, and Adelaide Pahl. She was predeceased by one very special great-granddaughter, Emma Pahl. Esther was born on June 7, 1931 to Bernard and Marie Remple in Gull Lake, Saskatchewan. She lived in Gull Lake and attended the Gull Lake Suffield School until the fall of 1945 when she moved with the rest of her family to Chilliwack, B.C. In 1946 at the age of 15, Esther met the love of her life, John (Johnny as she liked to call him) Reimer. John and Esther were married in the middle of a snowstorm on January 28, 1950. In 1964, with four children in tow and one on the way, John and Esther moved west and settled in Medicine Hat, Alberta, where together they raised their family. She will always be remembered for her soft smile and kind heart. Esther loved to knit, and especially enjoyed making little sweaters and blankets for her grandchildren and great-grandchildren. She enjoyed watching baseball with John, and you could always count on her to route for the Toronto Blue Jays. Esther loved to people watch, and she was often seen sitting outside her home enjoying the sunshine, and watching the world go by. She was a faithful attendee of Temple Baptist Church for many years, and her love of the Lord was evident in all she did. All those who knew and loved Esther will miss her dearly on earth, but are joyful in the knowledge that she is now celebrating eternity with our Heavenly Father. Family and friends who wish to pay their respects may do so at the PATTISON FUNERAL HOME on Tuesday evening, from 7:00 – 9:00 p.m. The funeral service will be held at Temple Baptist Church (606 7th Street SW) on Wednesday, November 14, 2012 at 1:30 p.m. with Rev. Robert Findley and Pastor Rick McAllister officiating. Esther will be laid to rest at a private family service at a later time. For those wishing to honor her, a donation can be made in her memory to the Kidney Foundation, P.O. Box 20143, Kensington Post Office, Medicine Hat, AB T1A 8M4, or to South Country Village, 1720 Bell Street SW, Medicine Hat, AB T1A 5G1. To e-mail an expression of sympathy, please direct it to: pattfh@telusplanet.net subject heading: Esther Reimer or you may visit www.gonebutnotforgotten.ca and leave a message of condolence. Funeral Arrangements are by the PATTISON FUNERAL HOME AND CREMATORIUM 540 South Railway St. SE, Medicine Hat T1A 4C2

No Condolences for “ESTHER LENA REIMER”