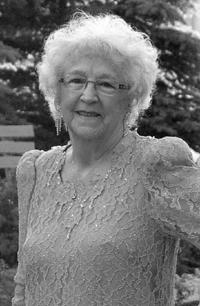 It is with overwhelming sadness we announce the passing of Marie “Jeannette” Tiede (nee Poulin) on Thursday, December 20th, 2012 after a brief but courageous battle with cancer. She was predeceased by her loving husband, Kurt (February 18th, 2009); her parents, Phydime and Aline Poulin; 6 step-brothers; 2 step-sisters; 4 brothers; 4 sisters and 1 great-nephew. Jeannette was much loved and will be dearly missed by her loving daughter and caregiver, Mary-Anne (Dwight Hawken) of Sechelt, BC; son, Robert (Debbie) of Moose Jaw, SK; son, William of Williams Lake, BC; 8 grandchildren, 7 great-grandchildren, many nieces and nephews and 2 brothers-in-law. Jeannette was born November 28th, 1922 in Dollard, SK. She moved to Moose Jaw in 1941; moved to Medicine Hat in 1997 until 2012, at which time she moved to Sechelt, BC to live with her daughter and husband. She was the youngest and last of seventeen children! She enjoyed many hobbies. Jeannette was a member of the Catholic Women’s League for 60+ years. As a teenager, she learned to dance and she met Kurt on the dance floor at Temple Gardens. They married in 1948 and enjoyed dancing through 60 years of marriage. The Funeral Mass will be celebrated on Saturday, January 5th, 2013 at 10:00 a.m. in St. Joseph’s Roman Catholic Church, 1064 3rd Ave. N.W., Moose Jaw, SK. A Prayer Service will be held on Friday, January 4th, 2013 at 7:00 p.m. in Moose Jaw Funeral Home. A full version of Jeannette’s obituary can be viewed on Moose Jaw Funeral Home’s website. Arrangements are entrusted to Moose Jaw Funeral Home, 268 Mulberry Lane. Todd Sjoberg, Funeral Director. 693-4550 www.moosejawfuneralhome.com