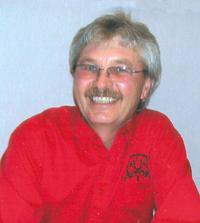 Douglas James Beierbach of Bow Island passed away on Tuesday, December 25, 2012, at the age of 59 years. He leaves to cherish his memory two children, Dean Beierbach of Medicine Hat and Dallas Beierbach (fiancé, Kaat Richter) of Bow Island and their mother, Alicia Beierbach; his granddaughter, River Beierbach; his mother, Dorothy Beierbach of Medicine Hat; his sister, Deanna (John) Clement of Montreal as well as several nieces and nephews. He was predeceased by his father, John Beierbach. Doug was born on November 20, 1953 in Medicine Hat. He started his schooling in the Richmound area, and completed his last five years at Alexandra Junior High and Medicine Hat High School. Doug started raising his family in Medicine Hat, before moving to Bow Island in 1984, where he has since made his home. Doug was working at St. Mary’s River Irrigation District as an electrician at the time of his passing and he was also a member and president of the Bow Island Legion for many years. Always enjoying a good joke, Doug was the master of the one-liners. He was always there to help others and put their work ahead of his own projects. He enjoyed slow pitch, carpentry, golf, the History Channel and anything chocolate. Doug was the best father and friend who will be missed by many. The funeral service will be held in the PATTISON CHAPEL on Wednesday, January 2, 2013 at 1:00 p.m. with Life Celebrant, David Townsend. To e-mail an expression of sympathy, please direct it to: pattfh@telusplanet.net subject heading: Douglas Beierbach, or you may visit www.gonebutnotforgotten.ca and leave a message of condolence. Funeral Arrangements are by the PATTISON FUNERAL HOME AND CREMATORIUM 540 South Railway St. SE, Medicine Hat T1A 4C2

No Condolences for “BEIERBACH”