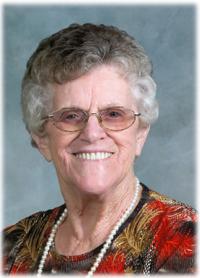 1921 ~ 2012
Mrs. Constance “Connie” Ashby, beloved wife of the late Les Ashby, passed away at the Medicine Hat Regional Hospital on Thursday, December 27, 2012, at the age of 91 years.  Connie was predeceased by her parents, George and Gertrude Platt;  husband, Les and son, Eric;  one brother and one sister;  one sister-in-law as well as four brothers-in-law.  She is survived by her daughter, Dayle (Jim) Steinkey;  son, Bob (Kim) Ashby;  daughter-in-law, Janice;  five grandchildren, Shane (Kristen), Heather (Elliott), Faye, Shaun and Christopher;  three great- grandchildren, Searra, Brendan and Damon;  two sisters-in-law, Elaine and Mary as well as numerous nieces and nephews.  After the passing of Connie’s husband and son, she moved into the Cypress View Foundation.  This is where she resided with her many new friends until the time of her passing.  Mom was a loving wife, mother, grandmother, great-grandmother and aunt.  She always put her family’s health and well being before her own.  Mom and Dad enjoyed many years together camping and fishing with their family and friends.  In their later years, they became Snow Birds and went South for the winter.  Connie was very active in Gordon Memorial United Church as a long-time member of the Ladies Evening Circle.  Along with Dad, she was also a member of the Senior Citizens Club of Redcliff.  Mom was cherished and loved by all who knew her and will be greatly missed by us all.  Those wishing to pay their respects may do so starting one hour prior to the Funeral Service which will be held at Gordon Memorial United Church, 401 – 2 Street S.E., Redcliff on Wednesday, January 2, 2013, at 2:00 P.M. with Reverend Blaine Schaufele officiating.  Interment will follow at the Redcliff Cemetery.  (Condolences may be expressed by visiting www.cooksouthland.com)  If friends so desire, memorial tributes in memory of Connie may be made directly to the Heart and Stroke Foundation, the Cancer Society, the ALS Society, Gordon Memorial United Church or to the charity of one’s choice.  Honoured to serve the family is COOK SOUTHLAND Funeral Chapel, 901 – 13 Street S.W., Medicine Hat, Alberta, T1A 4V4.  Telephone:  403-527-6455.

No Condolences for “CONNIE ASHBY”