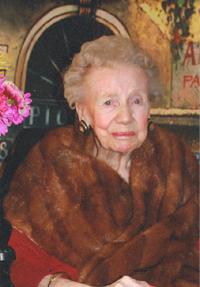 Elizabeth Feil of Medicine Hat passed away on Sunday, December 23, 2012, at the age of 88 years, beloved wife of the late Edwin Feil. She leaves to cherish her memory two daughters, Joan (Larry) Deering of Medicine Hat and Randie Feil (Keith Piddington) of Victoria; three grandchildren, Coreen (Terry) Litton of Medicine Hat, Mark (Kari Lynn) Deering and Paul Deering all of Calgary; four great grandchildren, Robyn Wheeler, Savannah Litton, Natalia Thacker, Rhys Deering and two brothers-in-law, Harry Feil and Jim Pfeifer. She was predeceased by her parents, Martin and Elizabeth Nitz; her husband, Edwin Feil in 1997; four brothers, Martin Nitz, Adam Nitz, John Nitz and Joseph Nitz and one sister, Annie Pfeifer. Elizabeth married Edwin Feil on June 24, 1944 in Medicine Hat and they lived there until 1964, when they moved to Kamloops, B.C. There, Elizabeth enjoyed the rolling hills of the area and also the growing conditions that enabled her to maintain an impressive garden, noteworthy especially for its tomatoes. The family would like to thank the wonderful staff of the Good Samaritan’s Residence for the excellent care of their mother. In 2005, she moved back to Medicine Hat to live closer to family. No formal service; a time of remembrance will be held at the Royal Canadian Legion, 702 – 2 St. SE, on Sunday, December 30, 2012 from 2:00 – 4:00 p.m. Interment will take place in Kamloops at a later date. As an expression of sympathy donations may be made to A.J.’s Loan Cupboard (Alan Joys Memorial Fund Society) Box 45006, McKenzie Postal Outlet, Medicine Hat, AB T1A 7H3. To e-mail an expression of sympathy, please direct it to: pattfh@telusplanet.net subject heading: Elizabeth Feil, or you may visit www.gonebutnotforgotten.ca and leave a message of condolence. Funeral Arrangements are by the PATTISON FUNERAL HOME AND CREMATORIUM 540 South Railway St. SE, Medicine Hat T1A 4C2

No Condolences for “FEIL”